In a rather hip space in Princes St, Dunedin, young people are learning more about themselves, gaining confidence and moving on to jobs, further education or even starting their own enterprise.

The Mana Rangatahi (MR) programme is real-life and rooted in people’s backgrounds and cultures, says one of the participants, Ben Sommerville (21).

They learned by doing, and he jokes about how much doing there was, as opposed to theory.

You could probably get through this programme without having a piece of paper in your hand!”

Ben lives with dysgraphia and attention deficit hyperactivity disorder (ADHD) and, in the past, found sitting at a desk writing essays a real battle.

However, he graduated from the University of Otago with a Bachelor of Commerce degree and expected to travel and work overseas, but the worldwide Covid-19 pandemic put a stop to that.

He met the two strong, passionate women behind MR, Heidi Renata and Sophie Te Huia, and, in his words “boom,” he was a “burgeoning recruitment consultant.”

Although not quite that quickly. First, Ben became one of 12 young people on the pilot programme, which allowed him to apply what he’d learned at university. 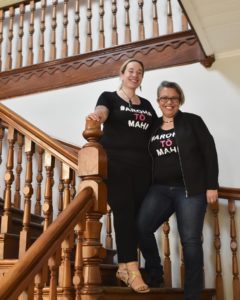 He also discovered more about his whakapapa or lineage, which was perhaps extra important because he’d grown up in a “very Pākehā” household.

“It’s put me well on my way into my whakapapa and Te Reo,” he says.

“You use this to analyse parts of your life within that context – who you are, how you came to be.”

Most of the kids on the course strongly identified with one or both of their grandparents.

Mana Rangatahi helped them process both the negative and positive messages they’d received in life and understand how to use them. For instance, someone who’d been told they talked too much began to see the benefits of this trait.

Ben says he gained real confidence and understood that he has a role to play in others’ development. As a result of all this, he got a job as a Recruitment Consultant/Talent Navigator for Talent Network.

“I suppose that’s a little cherry on top as well!”

The Chief Energy Officer of INNOV8HQ, Heidi Renata, says her company developed Mana Rangatahi, following a grant from the Ministry of Youth Development, via Startup Dunedin. The aim is to reach 200 rangatahi or youth during the next two years.

Alongside this, a community project hopes to develop a Youth Hub at the Princes St space.

Of the eight who completed the pilot programme this year, half went into work and half are being incubated in start-up businesses, while two of the eight are also doing further study or training. Ninety-five per cent of those in the start-ups had no prior experience of them.

“We’re really blessed that we got superstar rangatahi from day one,” Heidi says, adding that they were able to experience the difficult Covid-19 affected year together.

“This is why we want to do this,” she says, referring to the young people, who are aged between 16 and 24 years.

The 12-week entrepreneurship and employment pathways programme gives them a taste of running a business without the ‘fear factor.’

They’re encouraged to build upon their passions. For example, somebody who likes squeezing lemons might start a lemonade venture. Heidi says mentors and guest speakers influence the pathways of the youth towards work, further education or start-ups, asking: “If you were to jump on the waka, which horizons will it take you to?”

“We give you a paddle and help circumnavigate your waka to the three horizons; and we do this as a collective.”

Ben adds that MR puts people and resources around the young people to help them reach these horizons.

Heidi’s partner in MR, the Director of HIWA Consulting, Sophie Te Huia, says the start-ups being incubated are in creative arts/photography, Māori medicine, and training and development.

The community formed during the pilot still meets weekly to support one another. Next year, more will climb into the waka and head for new horizons.