A Central Otago woman who designed a beautiful tartan for her family and friends has left a legacy – a tartan for her region and inspiration for many.

She was in her late eighties when she combined her love of Central Otago, an artistic eye and weaving skills to design the tartan, which was initially only for herself, family and friends.

“After many trials on the loom, the colours of the tartan came together. I felt I had captured the essence and subtlety of the Central Otago landscape in a woven form, and so the ‘Southern Lakes Tartan’ was born,” said Shona.

The design was endorsed by the Queenstown Lakes District Mayor and was registered in Scotland as the official tartan for the Southern Lakes district in 2016.

Shona died at the age of 93, in 2019, leaving a strong legacy. One of her four children, Hilary Johnstone, runs a small family business selling products featuring the tartan, such as throws, rugs, hats, upholstery and kilt fabric.

For Hilary, her mum is an inspiration, particularly for women, including Hilary’s own daughters.

Who at 88 embarks on a project to design a tartan for a region?

“Mum showed them that if you’ve got a dream, follow it,” she says.

“It doesn’t matter what age or stage you’re at, you can still pursue your dreams.”

Hilary describes her mum as a great friend, well-loved, interesting and very “switched on.” She shares some of her mother’s story.

“Mum spoke fondly of the days before technology when handcrafts were a way of life, with people making their own clothes and mothers passing on knowledge to their daughters.”

Shona studied at the Dunedin School of Art, then in 1949 travelled by boat to England and attended the Royal School of Needlework and London School of Weaving. In 1951, she returned to New Zealand and helped set up the Otago Spinners & Weavers Guild and Otago Embroiderers’ Guild.

After retiring to Wanaka, she held a dream and told her family that when she had spare time, she would design a tartan for her beloved Southern Lakes.

Shona started designing various ways the tartan might look, dying wool to the colours she wanted and carrying out many trials on her loom to find the right weave and pattern. 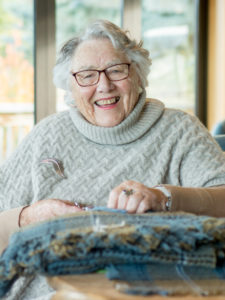 Her art studies enabled her to identify colours in the Central Otago landscape where she’d spent years tramping and camping.

Hilary says that for her mum, this landscape was “sort of like the backbone of her life.”

At the age of 88, Shona “hit it on the head” and perfected the tartan.

Shona wove the first tartan throw on her loom looking out over the mountains she loved. She then approached Stansborough Mill, near Wellington, to see if they could organise a weaving run.

It was a success and so Hilary suggested that the pair have fun and create a few more products for all to enjoy.

“Mum was very humble and didn’t want to make a thing of it, but it evolved gently and organically,” Hilary observes.

What started out as a gift for friends and family, and a dream she’d held for a long time, became a gift for a region.”

Wool from New Zealand sheep is dyed, spun and woven, then sewers turn this into designer pieces, which are sold online in New Zealand and Australia.

Working with other Kiwi companies is important and Hilary says they are one of several textile businesses “standing up for New Zealand-made and showing that we can do it.”

“We need to support New Zealand at every step of the product making.”

She says running the business also keeps alive her relationship with her mum and she feels close to her every day.