Oasis Community Café is a peaceful place of support and acceptance, and somewhere to call home in the Porirua suburb of Waitangirua.

It attracts visitors from beyond the immediate neighbourhood as more people hear about it. The Saturday market in the adjacent carpark also brings people in.

Run by a community trust in the local mall, Oasis is “a hub for this community and for everyone,” says trustee and founder, Josie Olsen.

Every week about 80 people drop in to sit and chat and share barista coffee and food. There is a focus on health and wellbeing, both physical and spiritual.

Josie says the Oasis family are people who have come to care for each other.

Often, they are facing many challenges through issues at home.

Changes in the lives of people and their families are what Josie finds so encouraging.

They also have computers and help people with their CVs and interview skills.

If people have needs, the Oasis team, all volunteers, can support and advocate for them, sometimes referring them to other agencies such as Wesley Community Action, which is also in the mall.

The Oasis traces its beginnings back to Wainuiomata, Lower Hutt, in 2001.

Wainuiomata was Josie’s home then and there were issues with glue sniffing there.

She and several locals began the Oasis in the shopping centre. It was “pretty hard” at first but in the second year they were embraced by the grateful youth who had been testing them.

Numbers prompted them to find a larger space in the shopping centre.

They brought in mentors to help encourage students to pursue their dreams for studies and careers beyond college.

They supported girls through boyfriend issues, which could otherwise have led to suicide.

They taught the girls to expect to be treated better.

Josie says she recently met one of the students who told her Oasis kept them away from alcohol and trouble.

After some time another group with a similar vision set up in Wainuiomata so Josie felt to move the centre to Wellington. They found space for them in Thistle Hall in upper Cuba Street.

Josie remembers several instances where her team’s support averted suicide plans, including a man who had written a suicide note, and a Chinese student who feared failing her exams. In both cases their lives were saved and broken relationships restored.

After about five years the Thistle Hall building needed to be seismically strengthened so Oasis moved to Crossways on Mt Victoria. They reached out to people of all ages, including those living on the streets.

Josie then felt to move Oasis again. She had moved her home to Porirua 10 years ago and, in 2011, she walked the length of New Zealand carrying a cross to share her Christian faith.

She then began looking for a new site and found it in Waitangirua Mall. The mall had been one of the country’s earliest malls, built with a supermarket and retail shops.

The site Oasis rented had been a probation office. The ceiling had fallen in and there was no kitchen.

Three years ago Josie and her team set about transforming the site into a new Oasis.

Josie says there has been good support through grants that help pay rent and electricity and they also get practical help from groups that include Titahi Bay Lions and the Knights of the Southern Cross (a Catholic organisation). Funding is always an ongoing need. The Oasis Community and Café Trust is a Christian non-profit organisation and is a registered charity. The trustees are all Porirua locals.

Josie says the ultimate aim is for people to feel totally accepted and “also experience the love of God.” The site includes a small chapel for quiet contemplation or prayer for inner healing. Josie, who is Catholic, has the blessing of her church on her involvement. 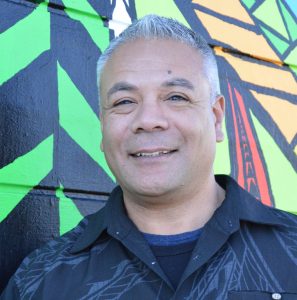 Karl describes finding the Oasis as a divine appointment

One of the people whose lives have been changed through Oasis is Karl.

He discovered Oasis when it was in Wellington.

He says it was a divine appointment and his life was changed after receiving prayer there.

“There have been significant transformations and miracles over the years in people’s lives who Josie has ministered to. And I have been a recipient like many others,” says Karl.

Every day is different

Every day is different and visitors include a range of ages.

Sometimes parents bring their children for help with issues they are facing.

Oasis has been building a relationship with nearby Maraeroa Marae and also makes its building available to other community groups to use.

One of the Oasis helpers is Shane Cotter. He says Josie brings a calm atmosphere to visitors and creates a safe environment where they know they will not be judged for having a bad day. People learn about boundaries of behaviour and speech through kind words.

Pusa Finau is from Samoa and lives across the road from Oasis. Becoming involved got him out of the house. Now he is a trustee and the Oasis disability co-ordinator.

He says Oasis is like a family to him.

Last year Oasis hosted a forum of the needs of people with disabilities. Soon afterwards Oasis was invited to have input into the Ministry of Health Disability Support Services update of its Faiva Ora National Pasifika Disability Plan.

Mondays, Wednesdays, Thursdays: 10 am until 2 pm. 2-4 pm help with CVs and cover letters plus chat or prayer for inner healing.

Chapel available for use 10 am until 4 pm.