Sam Dickie’s treasured memories of playing with her father’s tools in the backyard have sparked a new type of adventure play in Lower Hutt that involves children taking risks.

Sam, senior community recreation programmer with Leisure Active at Hutt City Council, had been listening to a presentation by Sport New Zealand about the importance to children of play.

“It brought to mind my favourite project when Dad was making things with tools.” Her interest in the trades is probably not surprising as both her grandfathers were builders.

A Google search revealed to Sam that after World War II children in Europe and Britain started creating playgrounds from bomb site rubble. Over time playwork in Britain has become a profession and the term adventure playground was introduced.

Sam began to put together a plan for a similar project in Lower Hutt, suitable for all children aged five to 12 years.

We are trying to get rid of bubble wrap and cotton wool,” Sam says.

Risk is important in children’s lives and if they don’t take risks when they are young they are more likely to take risks in their teenage years that put people in further danger, she says.

Setting up a permanent playground was made a long-term goal because of the need for a supervision team.

So she decided to try a mobile playground that could go to many places, starting with schools which already had supervision in place. Children at Belmont School about to try out the new equipment.

“It’s about putting risk out there in a way that is manageable for parents and kids.”

Modern outdoor public and school playgrounds are typically static structures designed by adults to support activities that prioritise injury prevention above all else.

Building materials and tools provide children with opportunities to fire up their imaginations, use tools, learn risk management and make their creations.

Some 66.2 per cent of New Zealand parents surveyed in the 2015 State of Play executive report believed that relaxing the safety rules and introducing risky play practices and equipment would enhance children’s development.

Hutt City Council’s upcoming play report shows that about 87 per cent of Lower Hutt parents and grandparents believe play is a fundamental right for all children; it’s important, unstructured, unsupervised and creative.

The research also revealed that according to Lower Hutt kids, 88 per cent of them don’t play every day, the figure raised to 96 per cent according to their parents.

With these statistics in mind, Hutt City Council is working to grow opportunities for free, undirected children’s play.

Sam repurposed a trailer owned by Hutt City Council. She filled it with new trades equipment from Mitre 10 including lightweight (and often smaller than full-size) hammers, hand drills, levels and saws plus tape measures and nails.

For the first two schools the trailer was taken to (Belmont and Waterloo) the council provided timber offcuts to see what worked. Children from Sacred Heart School in Petone at play.

With the importance of sustainability, offcuts are now sourced from local businesses and trades, providing a wider variety of elements, shapes and sizes.

The generous people at Naenae Menzshed agreed to cut down pallets to a suitable size for the students. They also advised on the proper tools and helped to make a safety video edited by the team at Naenae Clubhouse Network.

“Passing on skills to younger people has always been on our agenda and Sam’s project epitomises this,” says Archie Kerr from Menzshed.

New real estate firm Cummings Kilgarriff & Co were looking for a project that was a little different to sponsor and decided to take on the Build & Play trailer.

Diane Cummings, co-director of Cummings, Kilgariff & Co Realty, was a teacher before moving to real estate and setting up the Petone company last year. She is thrilled to support the programme.

We like the fact that Build & Play comes pre-packaged and ready to go.

“Teachers are overloaded with all of the things they are expected to do and parents also don’t have much time.

“As a company we are very family focused – we are all parents and work long hours and know that children from all walks of life don’t get the opportunities to play that they used to,” she says.

The results speak for themself

Sam says she is “excited with the results so far” and that every comment has been constructive or positive. Each school has been able to use the trailer in a way that supports their curriculum.

“Behaviour was fantastic, every child was highly engaged. Great to see all of the key competencies all in one place. Authentic,” wrote a teacher at Belmont School. 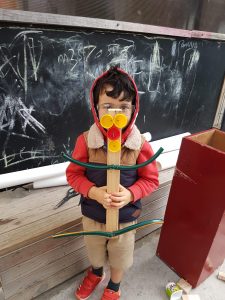 A volunteer at Waterloo said “It was amazing. All the kids got amongst it and had a go. All the kids were completely engaged for the entire time. I love watching my son do things he wouldn’t do at home.”

A Sacred Heart educator added, “It was exciting to see the participation of my special needs students on an equal footing to their peers and being able to produce items of their own choosing.

A group of students worked together to assemble a full-scale football goal from piping. Another group made a ‘water park’.”

A spin-off is the possibility some young appetites may have been whetted for a career in the trades. Regardless, seeds of active creativity are being sown, Sam says. And children get to take home what they create.

In 2019 the trailer will be available to community groups as well as schools. Long term, Sam would like to see the trailer have a permanent public site or sites and volunteers to supervise its use.

Groups interested in using the trailer can use the same contacts for Sam. A $50 refundable deposit is charged.