October 6th saw the usually quiet and unassuming West Coast village of Blackball transformed into a vicious battleground. It all started with a teapot.

Blackball is a township with a tumultuous history. Once a mining town, it suffered greatly with the closure of local mines. It has reinvented itself several times over the years to match economic pressures.

It had a resurgence during the era hippie communities and is now renowned for its delicious sausages. Shared struggle has been the cement that binds this strong community.

Another major change is on the horizon with the Paparoa Track due to open soon. Blackball will be the gateway to this latest addition to New Zealand’s Great Walks.

In partnership with the Department of Internal Affairs, residents sit on a community-led development steering group, committed to steering development in a direction that retains their town’s character.

I think everyone’s sick of being serious about all these meetings we’re having and they wanted to do something fun.”

So when something unexpected happened, she ran with it.

Meg received a declaration of war from the Waitati Militia’s Pirate Queen (Mandy Mayhem- a friend of Meg’s) in June. The war declaration accused her of stealing the Militia’s teapot. The teapot in question was said to contain the Militia’s deepest, darkest secrets.

Meg insists “It was absolute lies!”

But if it was to be war, Meg decided it had better be warranted. So she sent a spy to the Pirate Queen’s house to uplift the disputed teapot and paraded it around the township.

Social media was plastered with pictures of the teapot out and about on the town. “This teapot was happy. We took her out to the bar and out to few meetings. We put her in the trophy cabinet and had her cosied up with a couple of sausages.” 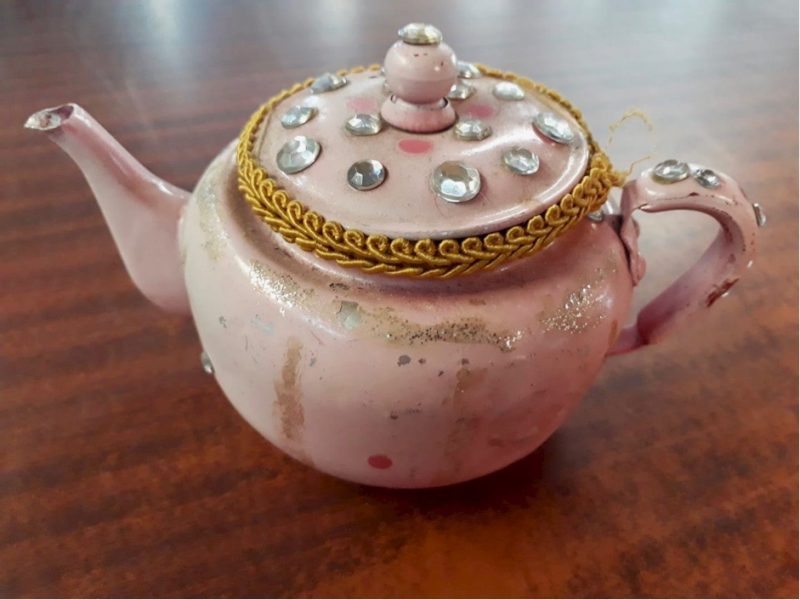 This act of deliberate provocation had the desired effect and planning for an invasion began. Practicing Pacifist Warfare, the Waitati Militia has staged several such invasions through the years.

Non-harmful weapons such as flour bombs, pool noodles and paper swords are employed along with Heavy Duty Assault Poetry to subdue the enemy.

It is not the first time Blackball has been targeted by such a war either. In 1985 the town was descended upon by Alf’s Imperial Army, led by The Wizard of New Zealand (Ian Brackenbury Channell).

And they were prepared.

Even the Mayor of Grey District, Tony Kokshoorn turned out (in a tutu and corset) to repel the attack.

The Pirate Queen was quoted as saying,

This is the messiest battle we have ever had. You guys fight dirty.”

It was shared silliness that brought Blackball together this day. The Umpire (in the hat) and Aunty Pete Fleming (supplied)

Mandy Mayhem also happens to be a registered celebrant and Meg had been planning to marry her partner, Mike Simpson.

It seemed fitting that the day be rounded off with the whole community sharing in a wedding. And so it was. They cobbled together some broomsticks to form a wedding arch and performed a hand fasting ceremony under the blossoming apple trees. The community swelled with the after-glow of play.

In closing to a day of community spirit and hilarity, Meg reminds us that,

The kidnapped teapot was restored to its rightful owners, but was sadly run over by someone’s car as the militia went to leave.