A bike library that puts youngsters on wheels is changing streets and families in Paekakariki.

While there are many schemes in New Zealand that fix and give out bikes, Paekakariki’s is the only one Jan knows of that operates as a library.

A particular goal is to save parents spending up to $1,000 a year for their children to catch the train or bus to college in Paraparaumu, about 9 km away.

The new Te Ara O Whareroa cycling and walking trail between Paekakariki and Raumati through Queen Elizabeth Park means students can, once again, adopt the traditional means of transport to school that so many generations have used the past.

New cycle tracks that are part of the Kapiti Expressway mean people can cycle mostly off-road from south of Tawa, north to Peka Peka. In 2020, when the Peka Peka to Otaki section of the Expressway is finished this will enable off road cycling for 70 km. 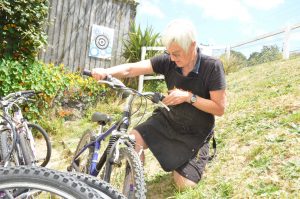 Bike Library founder, Jan Nisbet, wanted to set up a system to pass bikes on and provide a fix it service.

Jan grew up in the central North Island and rode a horse to school. It was in her fifth form at boarding school that she started biking. She still remembers the feeling of freedom and fun it gave her.

There was then a biking gap of many years until she took part in the 1984 Coast to Coast race in the South Island and did a few triathlons.

Biking used to be a rite of passage growing up. Jan wants to bring that back.

“Kids here are realising biking is fun,” she says. “And their parents are enjoying being less of a taxi service.”

A local parent, who has five children at home, says putting them on bikes has made a huge difference.

By having bikes, my life has become so much easier. Now the older ones can, with decent lights, come and go even if it is dark. I used to run a virtual taxi service.

“Among the students who do ride to college there is a feeling of friendship and solidarity; they usually ride every day, even if it is raining. Sensibly the college allows the students to wear other clothes to bike in if the weather is inclement.”

By the end of 2017 more than 300 locals of all ages have been helped onto loan bikes from the library.

Customers pay between $25 and $35 per annum, depending on their financial circumstances. And, as children grow or their needs change, they simply swap the bike for a larger one.

All the bikes have been donated. Some were located in garages and sheds and, even, under hedges. Bikes beyond repair are stripped for parts.

The Paekakariki Community Board gave a grant to help with the set-up and to buy tools and materials.

Because they repair and re-use bikes that would otherwise be scrapped or sent to the landfill, the Library received a waste minimisation grant from the Kapiti Coast District Council through the Ministry for the Environment’s Waste Levy scheme.

“I wanted to set up a system to pass bikes on and provide a fix-it service,” Jan says. 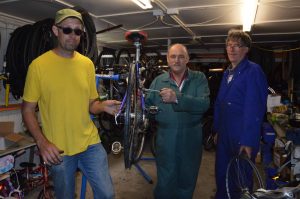 “The fix-it service is important because although many people promised to donate bikes once they had them repaired they often didn’t get around to it.”

Jan has a core team of three volunteers, supported by others. They run the Library workshop to get donated bikes into working order. Not only does it provide the volunteers with an outlet to use their skills but also it has proved a way for residents new to the area to get to know the community.

The community’s maritime location means rust takes its toll on bikes, and more than 120 have been stripped for parts for re-use.

The Library also runs regular workshops to teach locals how to maintain their bikes.

It receives support from commercial bike shops which are likely, in the long term, to receive business as more people get into cycling.

Following a nomination from Paekakariki Community Board chairman, Phil Edwards, the bike library won the Sport and Leisure section for Kapiti in the Wellington Airport Regional Community Awards a couple of years ago.

Jan and the Library were highly commended in the Get On Yer Bike Award at the 2016 Bike to the Future Award.

Local councillor and Deputy Mayor, Janet Holborow, says the project means everyone in the community has access to a bike.

“There’s often a collection of old bikes beside the hall that re-emerge from the workshop as good quality working bikes. The project means that everyone in the community has access to a bike.

Children also have the opportunity to learn about cycle maintenance and repair, and the value of effort and perseverance. There’s a real buzz around the workshop on bike library days, when people of all ages come together to work on the bikes.

Jan says the Library has probably ‘soaked up’ most of the local need. Now she’s keen to spread the concept north and south. The Library recently sent about 20 bikes to a new group in Otaki.

“For a community hoping to set up a library, finding a suitable location will be their greatest challenge because it requires more space than a private garage,” Jan says.

The Bike Library operates from the basement of the Paekakariki Community Trust-run St Peter’s Village Hall in Beach Road, the main shopping street of Paekakariki.

It is open noon to around 6 pm every Thursday and on the first Saturday of the month from about 10 am to mid-afternoon.