Locals listening and having their say at a South Dunedin Community Network hui in 2021. Photo: supplied
Share
Tweet
Email

What began as community anger about destructive 2015 floods has grown into a network which celebrates “the goodness that is South Dunedin”.

In June 2015, heavy rains caused serious flooding which damaged more than 1000 South Dunedin businesses and homes and forced some evacuations.

Blocked drainage tanks were part of the problem and locals were angry at the Dunedin City Council, which is responsible for the storm water system.

In 2016, a residents’ group formed and in 2018, the resulting South Dunedin Community Network started receiving funding from the council’s place-based community grants fund.

“People were individually standing up and realised that if they didn’t join together, they wouldn’t get anywhere,” says Network Manager Robyn McLean.

South Dunedin was built on land reclaimed from a coastal wetland and its low-lying 600ha is extra prone to flooding and climate change effects.

About 10,000 residents live in reasonably dense housing, some of which is poor quality.

Robyn says between 50 and 60 per cent of local properties are rented and many landlords haven’t invested in their buildings because of climate change uncertainties.

Another challenge is an incredibly diverse community, with a high proportion of low income families and people who are older or disabled. Many live alone.

“Sometimes things are more difficult in this community.”

She says the struggles also mean locals are resilient, as has been shown during the Covid-19 pandemic of the past two years.

“We can still be tough and wonderful and then crack a hilarious joke – at exactly the wrong time!”

There is a really lovely side to our community, of really grounded practicality and a sense of humour. That’s what I love the most about working on this street.”

She says much good is happening at present.

KiwiRail’s Hillside Workshops will effectively reopen, retail and office space is being built at the former Wolfenden and Russell clothing and drapery shop, and Bathgate Park playground is being upgraded.

The network has five points of focus. The first is advocacy, helping residents get involved in issues such as public transport and sea levels rising/climate change.

The second is celebration – “to celebrate the goodness that is South Dunedin.”

The South Dunedin Street Festival has become an annual fixture and although the pandemic forced its cancellation this year, the next festival is planned for April 2023.

Keeping Covid-19 prevention measures in mind, the network is celebrating “cute, beautiful” local houses. Volunteers will photograph these and a multi-picture poster will be printed.

Connection is the third focus.

“That is really what our bread and butter is,” Robyn says. During our interview, the phone is ringing and her ‘to do’ list looks like a pen-on-paper jigsaw.

Resources in the form of organisations and individuals already exist in the area and the network’s job is “connecting the dots”.

For example, during last August’s Covid-19 lockdown, single parent families were struggling with a lack of stationery for their children.

The network linked them with an organisation that had a huge stationery budget which couldn’t be used because of the home-isolations.

We’re joining the dots, helping everyone connect, giving South Dunedin the small town feeling that it used to have.”

The network organises two community hui a year. These are open to anyone who lives, works or plays in South Dunedin, and the next one is on June 1.

These gatherings provide a chance for the council to be accountable to locals, a shared meal and fun activities so people can have their say.

Network Chair Eleanor Doig is committed to non-violence and this underlines participants’ interaction with the council.

“You’re definitely allowed to challenge, but in a respectful way,” Robyn says. 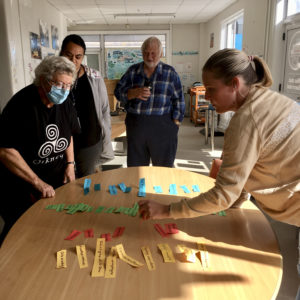 The Community Rooms are available for free or a koha and a range of groups use them.

From the June 24 Matariki celebration until October, a food truck will park outside the rooms on Fridays and Mondays.

The owner’s aim is to provide affordable family food and people can eat their kai inside the rooms.

“It’s lovely how people are thinking about how else to use this space,” Robyn says.

The network’s fourth and fifth points of focus are communication and creating sustainability within the network.

Accordingly, the network and the recently-formed Dream South D Steering Group will share a five-year partnership with the Department of Internal Affairs.

The department will provide practical support and access to a national pool of $4 million, and the community will be invited to think about the future and plan for it.

South D people struggling with everyday concerns may be starting to dare to dream.

If interested in its May 30 volunteer party, please email [email protected]