A man who, together with his two small dogs, has spent a year walking more than the length of New Zealand, is encouraged by New Zealanders’ qualities and their desire to help others.

“I managed to work out a way to basically see people at their best,” Stephen Brassett (35) says.

“It was Chicken Soup for the Soul type stuff,” he says, referring to a popular book of heart-warming tales.

Stephen and his two dogs left the Southland SPCA in Invercargill on January 7, 2017 and about 5000km later, arrived at his parents in Wellington on January 6 this year.

The former animal shelter worker and dog trainer set off on his “Longest Walk NZ” with the aim of promoting various animal welfare groups and encouraging people to become actively involved in them.

Asked what was the highlight of his journey, he replies, “people, really”.

People just coming forward, wanting to help. I realised a lot of people were looking for an outlet and way to help, but society doesn’t allow for that.”

Along his route, he says people donated food and money for his journey; invited him to stay on their properties; cheered him on, and supported what he was doing.

New Zealanders are supportive of animals’ rights and welfare, he says. He wonders why, therefore, the Government doesn’t invest more money in animal welfare.

Animal welfare agencies are mostly volunteer funded and supported. He says even though the Royal New Zealand Society for the Prevention of Cruelty to Animals (SPCA) receives Government funds towards its inspectorate, it also relies heavily on volunteers and donations. 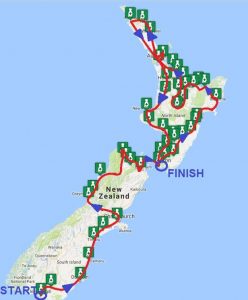 From Invercargill, to Kaitaia and back to Wellington … Stephen and the dogs’ route plan. Image: “The Longest Walk NZ”.

Stephen’s trek was from Invercargill to Kaitaia and included a circumnavigation of the North Island. He followed a “windy, wiggly” route, stopping at many animal rescue shelters, and dog rehabilitation and re-homing centres.

Piccolo also enjoyed the trip, although he is older and less adventurous. Stephen says this dog often rested in “Charlie the Chariot” – the home-built yellow trailer where the trio slept. 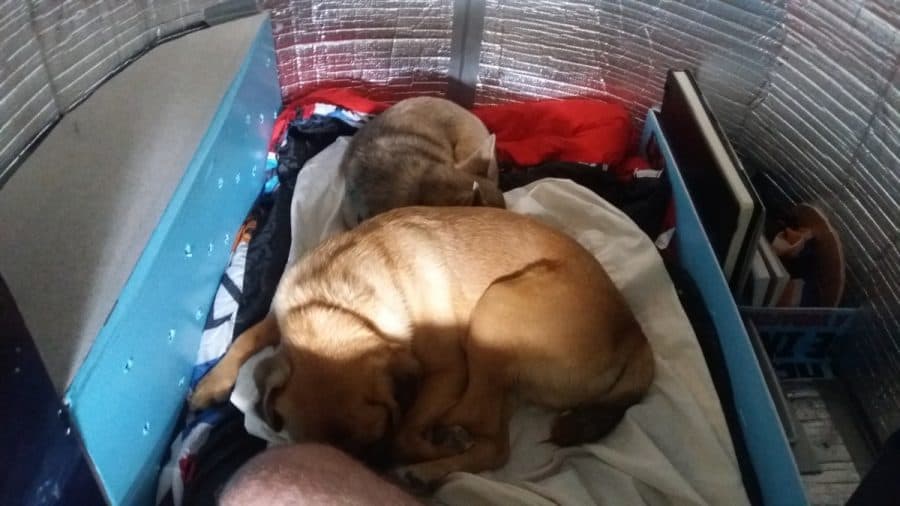 Home on the road … Jake (front) and Piccolo resting inside the micro camper. Photo: Stephen Brassett.

Stephen hauled this micro camper rickshaw during the day. It contains food, water, clothes, other supplies, a camp stove, bed space and wash basin. It is insulated and has a basic solar collection and powering system. Washing day and time to recharge the solar panels. “Charlie the Chariot”, home to the trio for a year. Photo: Stephen Brassett.

Stephen’s aim was to walk 20km a day, however this varied. In addition to the people, highlights were Hokitika; the Southern Alps, particularly across Arthur’s Pass; and Motu Road Trail, north of Gisborne.

“This was quite peaceful, quite beautiful.”

By the time he arrived at Motu Road Trail, he had walked almost two weeks without the opportunity to buy any supplies, he says.

Where possible, they travelled on back roads, however walking on busy roads was sometimes the only option, such as south of Palmerston North. He says sharing roads with vehicles meant being aware of what was driving close, and listening lots.

How did Stephen feel when he finished trekking more than the length of New Zealand?

“Sad. I was proud of the achievement, but sad that I had to go back into slavery; back into selling my time for money. The walk couldn’t last forever.”

A journey’s highlight was Hokitika, an historic town on the South Island’s West Coast. He and the dogs have now moved there to live and one of his jobs will be as a full-time Youth Worker for Snapshot.

Stephen will also co-ordinate the local Community Champions project for the national “It’s Not OK” campaign, which helps challenge and reduce domestic violence.

I have a strong belief that problems are caused, and can be solved, at community level,” Stephen says.

During “The Longest Walk NZ”, he had taken action and encouraged people to become engaged in local animal welfare initiatives, rather than simply donate money.

He believes it is important to develop and maintain local support networks, whether to prevent domestic violence or cruelty to animals.

“Both of them are very important things to be involved in … changing conversations … making the world a better place,” he says.

And how are the dogs, Piccolo and Jake, after their New Zealand odyssey?
“Right now they’re asleep. They’ve just been for a massive walk.” 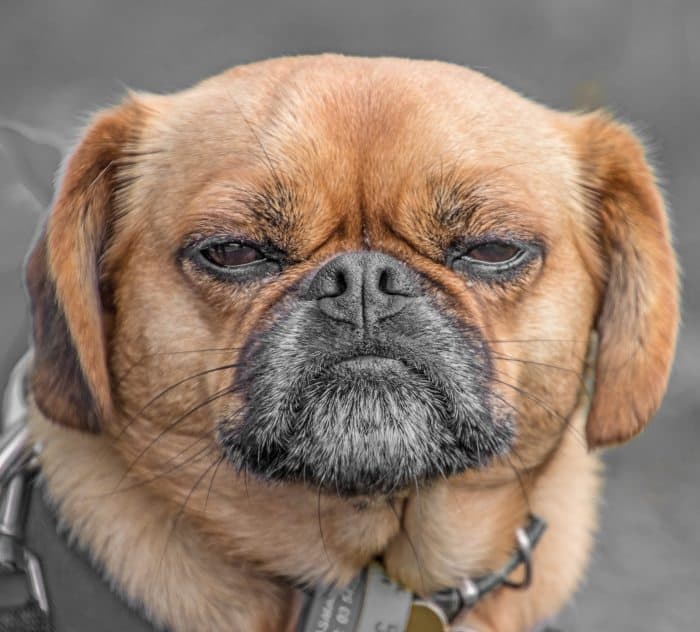 Stephen isn’t referring to their long New Zealand walk, but to one just that day, on a beautiful West Coast beach in autumn.

For information about the “It’s Not OK” campaign, click here