Losing their young son to a mystery illness motivates a Wellington couple’s dream to build a haven for children who are living with complex health conditions or terminal illnesses.

In 2018, James Swan died at the age of five from a condition that was never able to be diagnosed.

He had begun life as a healthy newborn but after two years became ill.

In his memory parents, Nicola and Graeme Swan, are establishing the Swan Nest to cater for children like James, especially those with long-term complex health conditions or terminal illnesses.

Nicola says hospital children’s wards are focused on an expectation of recovery but a facility is needed in the Wellington region for children and their families who need support outside of medical care, especially as their condition worsens.

“There is an inequity of services between those with diagnosed conditions and those with no diagnosis, “Nicola says.

She says that currently there are around 200 children in the greater Wellington region who could benefit.

“Numerous tests and procedures, phone calls with devastating news, and no health professional able to tell us what was happening to our little boy, was an experience and rawness that no parent could ever prepare for, let alone imagine.

The medical team caring for James were incredible, and continue to be so, but there was no outside support. No one to help us process what was happening.

“No one to begin to help us cope. If you are thinking it was the worst of times, it was, and to this day it still is,” says Nicola. Nicola Swan, displays a portrait of her son James, who died from a mystery condition, drawn by artist, Natalie D’Cunha

The Swans have set up a charitable trust and hope to model the nest on a Waikato facility called True Colours.

Nicola, the charity’s unpaid CEO, says the vision began after they heard from other families in the same situation. While the standard of medical help is high, it’s the need for emotional and practical support for the rest of the family that is lacking.

“You go to an appointment, get life-altering news and you get in your car, but there is nowhere to turn to help guide you in what is happening to your child and your family.”

“When there is no diagnosis, even Google can’t help,” Nicola says.

James had many tests but died without a diagnosis. The Swans describe his condition as similar to motor neurone disease but that’s an adult condition.

Further down the track parents can be faced with juggling to keep one of them in the workforce while the other cares for the child, often, in hospital. And then, who looks after any other children? Many marriages break up because of the stress.

Graeme became the family breadwinner as Nicola gave up her work as an early childhood teacher after James became ill.

Looking back, she wonders how she coped caring for him at home and with two older children to also look after.

“How did I do that with days of no sleep? We would need a room for parents to sleep at the Swan Nest.”

Nicola says they never alerted James to the lack of services but always kept his life as positive as possible. The Swan Nest will aim to help children live a life full of magical memories and opportunities.

The Swans were fortunate James was a placid patient who didn’t find hospital scary. 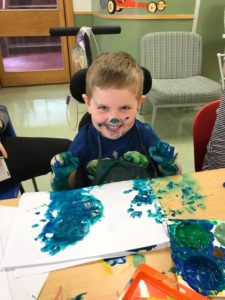 James Swan enjoying art. Art therapy will be part of the Swan Nest

“And James totally understood what was happening. He knew about stuff before we did,” says Nicola.

While the dream is buying or renting a house to become the Swan Nest, the couple would like to start a mobile service provided in a child’s home or hospital. It could include art, play, physical therapy and counselling.

The Hutt Valley and Wellington’s northern suburbs are considered the most suitable areas for a house because they are central, flat (for wheelchair access) and away from hospital routes that the children often remember.

If they could get funding, renting a house would be an option.

However, they have raised only $6000 since December 2019 and Nicola has been told that due to Covid-19 there is little or no funding available to new applicants.

Thinking outside the box

The Swans are trying to think creatively.

Nicola hopes there might be someone who could either give or loan a house to the charity.

“A million dollars would obtain a physical facility to rent and pay for staff,” she says.

Families are floundering and having to deal with it all themselves.”

She says parents are having to give up jobs and subsidise feeding products, medicines and, even, hospital parking because the child’s health means public transport isn’t an option.

And what does Nicola think James would have made of the Swan Nest concept?

“They never told him about it but I know he would have been so excited to have a place for home to be normal.

“When we looked at True Colours we looked at each other and thought James would have loved it. It was a place where he could process his world, and the rest of the family would have been supported.

“He was a very people person; his room became the central place for pulling people into it.”