The Dunedin zero waste designer has been working to change people’s perception of waste, so that they realise it is a resource.

“I started seeing and using waste as a resource.

“My hope in doing so was to help other people see it too.”

For the past eight years, she’s been trying to make zero waste fashion more visible and perpetuate a kaupapa, or approach, to this that everyone can get involved in.

Lots of people have the capability to create in this way. It’s about trying to make a higher quality product from something which is not viewed as high quality, she says.

Practically at her Senorita AweSUMO studio, this may look like a stylish black and blue jersey made of manufacturers’ offcuts, a colourful “bits and pieces” men’s shirt or a pretty evening dress fashioned from offcuts.

“It’s just re-imagining it; seeing it as that resource and putting it together in ways that are wearable.” 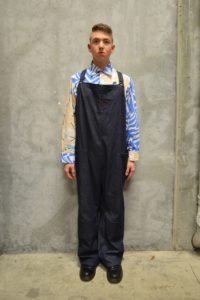 Fiona believes that designers can serve their community by providing solutions to problems.

When she was a second-year student at Otago Polytechnic, she learned how much material is wasted in the commercial fashion industry.

According to Greenpeace International, an estimated 60 billion square metres of textiles are left on the worldwide cutting room floor each year.

Not only are these materials saved from going to landfill, but the clothes also offer a local alternative to those mass-produced overseas in factories which may be contaminating waterways and polluting the environment in other ways.

I want to shake that system up a little bit and disrupt it; create a new way of doing things.”

Fiona reflects that actually these concepts aren’t new because the first human clothing, made of animal skins, wouldn’t have wasted resources and nor does traditional weaving.

She points out that Japanese culture has much zero waste clothing, such as kimonos, and early historical dress was also mostly zero waste until industrialisation happened.

Fiona is the chair of the Just Atelier Trust, which runs Stitch Kitchen. The community sewing room helps people upcycle, reduce textile waste and clothe themselves for a reasonable price.

Stitch Kitchen recently moved from Dunedin’s warehouse precinct to larger premises in the historic Prince of Wales Hotel building, as did Fiona’s studio. Something else new is in the making, with her establishment of a resource recovery and waste minimisation company called Res.Awesome Ltd.

The designer is taking what she learned about textiles and applying it to all types of waste.

“It’s about mapping the system and creating a new one for Dunedin.”

A Dunedin City Council waste minimisation grant has initially funded the venture. Fiona is setting up a database to collect information about individuals and organisations which are recycling, repairing and developing circular economies.

She says city residents need education and easy-to-access information about what recycling facilities are available and where to go, such as when recycling batteries.

Res.Awesome is another way she as a designer can serve her community through helping to provide solutions, she says.

Designers and others have to think, act and create in new ways because the world is constantly changing, as evidenced by the international Covid-19 pandemic and resulting economic crisis.

She has learned from experience not to be afraid of change.

“In those change moments, that’s where the magic really happens.”

Greenpeace’s call for a fashion revolution