Assistance dogs are being trained to help New Zealanders with a wide range of disabilities. For one Kiwi with diabetes this has been life-changing.

“They’ve completely changed my life around – my health, my welfare, my independence,” Brenda Ferguson says.

Assistance Dogs New Zealand Trust (ADNZT) is a registered charitable trust which began in 2008 and annually supports an estimated 40 clients throughout the country.

About 40 volunteer families raise and board the pups/dogs, says Alex Williams, the trust’s Fundraising and Communications Manager.

Volunteer families in Auckland, Waikato and the Bay of Plenty care for the pups until they’re approximately 18 months old.

“It’s their job to be exposed to as many new environments, people and scenarios as possible to become evenly tempered, well-mannered dogs ready for training.”

They then live with new volunteer “boarding families”, usually in Auckland, while paid professionals conduct six months of formal training.

The canines have already been tailor-matched with clients, so learn tasks specific to that person and disability.

Between eight and ten new dogs graduate per year and Alex says they assist both children and adults.

“A high portion of our clients have autism and often multiple disorders, we also have clients with disabilities like Cerebral Palsy, Multiple Sclerosis and Down syndrome.”

For three decades, Dunedin nurse Brenda had almost no independence because of type 1 diabetes and a complication called hypoglycaemia unawareness.

This means her blood sugar drops rapidly with no physical warning, resulting in instant unconsciousness and multiple falls, broken bones and concussions.

She relied on family and friends checking on her all the time. Occasionally when interruptions prevented her from communicating, police officers had to look for her.

“Since having Pip, he’s been my guardian angel, I haven’t had any concussions, it’s been great.”

Pip is trained to smell a pheromone in Brenda’s breath that indicates when her blood sugar is dropping. If her glucose levels are getting low, he’ll alert her by constant nudging, pawing or licking.

When Brenda is at home, Pip brings her jelly beans to quickly restore blood sugar levels, or removes the telephone from its base and brings it, in case she needs assistance.

Brenda worked at the Dunedin Public Hospital for 25 years and the Labrador was trained to listen only to her commands, not all the other voices wanting to interact.

He was the first service dog at any public hospital in the country, although she battled for 11 months to achieve this.

Since Pip’s arrival, the hard-working nurse enjoys much more independence, no longer needing to rely on others to check she’s okay.

The burden of having to have so many people look after me has dramatically reduced”.

She considers the dog has given her the opportunity to climb the career ladder into management at Ryman Healthcare, where she now works.

“I was nursing a very long time and never got the opportunity to climb because sometimes I’d become the patient instead of the nurse.”

Pip’s diligence means this is no longer the case.

It costs $75,000 to breed, train and support an assistance dog throughout its working life. Brenda fund-raised $20,000 to contribute to the programme. 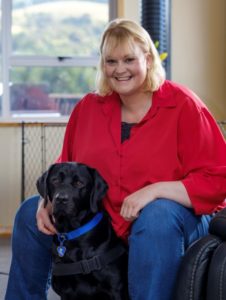 “Pip’s made such a huge adjustment in my life for the better. I would like other people to have that opportunity.”

When she received the Labrador, there was an 18-month waiting list which has now grown to five years.

Alex says the trust aims to double its output and graduate 18 to 20 dogs a year, which would require a significant increase in staff and resources.

“This will better meet the demands of our wait list and the disabled community in Aotearoa,” she says.

The trust’s website notes that before it began, people with disabilities such as autism, Down syndrome, cerebral palsy and diabetes had nowhere to go to obtain a dog to assist them.