Allan Kirk (79) has been dirt track speedway racing for 43 years and only missed one season. “I like good tracks to race on,” he says.

What makes a good track?

“Not overly watered; too much water can wipe a lot of speed off, ” Allan says.

The Daily Encourager met Allan and his wife of almost 56 years, Lorraine, after they’d driven from their Timaru home to Dunedin for the Beachlands Speedway this month.

Off the track, Allan is amiable. 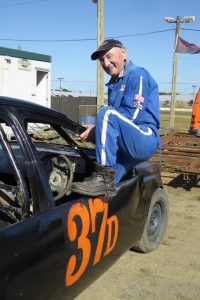 Once behind the wheel of his black V8 Ford Falcon, he is fast, competitive and beats many younger drivers.

In 1979, he won the ‘2NZ’, coming second in New Zealand in the modified sportsman class. This was his biggest thrill.

Allan responds that while he considers he has the fastest rear-wheel drive car, the front-wheel drivers are “caning us”.

The evening the Daily Encourager visited, Allan and his ‘Kirkie’ 37D car fought hard and skilfully to gain a first and two seconds in the production class races. The next night, he won both races he competed in.

I just muck around, it’s just a hobby. Something I’ve enjoyed for a long time,” he says.

Asked how it feels to pass younger drivers, he has just one word.

Allan has raced on every track in the South Island and deliberately went to Nelson because this was the only track he hadn’t been on.

Among many achievements, he won the King of the Coast in the production car class in Greymouth in the 2000s.

“It was pretty bloody hectic, to be honest. It was really good.”

Four years ago, Allan had a triple bypass operation. He has also overcome bowel cancer, so wears a colostomy bag as he speeds around the tracks.

Breathing can be a problem now, so he uses an inhaler before a race to open up his throat.

Speedway racing can be competitive and intense: “It is real hard work.”

One time in Cromwell, BMWs were racing and he wanted to see how he went against them. About six laps into the race, he got past one.

“That gave me a thrill.”

However, half a lap later, he had to pull off the track because he was physically out of breath.

Allan receives a boost from the younger drivers, with whom he interacts a lot. He says they are very positive.

It pays to stay with nice, positive people.”

Lorraine attends most speedway meetings and straps him into the car, puts on his gloves, hands him items and puts the ‘tear-off’ plastic sheets on his visor before a race starts.

“I don’t do any mechanical work,” she adds. Started with a Dodge

Allan started racing in 1974 in his home town of Balclutha, after his brother gave him a 1938 Dodge.

“Then I got quite keen on it and been doing it ever since.”

He has owned eight cars. Originally, he raced the original stock cars, stock rods, then modified sportsman cars, followed by saloon grade, driving a Tirana Chevrolet V8. In the early 2000s, he switched to production cars, which are cheaper to run than saloons.

In this production class, Allan won the Otago Championships twice, including in 2010; and gained two seconds and a third. He came second in the 2006 Canterbury Championships.

He’ll complete one season after he turns 80 in August.

“And I’ll have a think about it then. If I’m still enjoying it and still can breathe….”

What keeps him going?

“I’d be no good at playing cricket,” he jokes.

It’s just what I’ve been doing all my life and you don’t give up unless you’ve got to.”