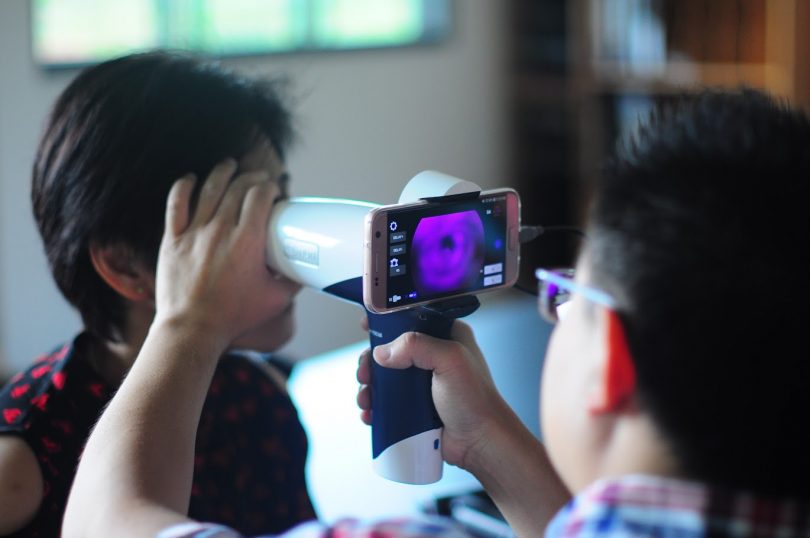 New Zealand eye care technology company oDocs Eye Care, which has just invented a new eye camera, has set up a branch in Borneo, to help improve the eyesight of rural Malaysians on the land of Sarawak.

Chief executive Dr Hong Sheng Chiong says their oDocs team has just returned from a social impact mission and a trip to Kuching, Sarawak, Malaysia, on the island of Borneo.

“We partnered with the Lions Club and the Sarawak Diabetes Association to screen about 300 people and raised awareness about eye health. I chose to go there because I was born there, and the island is still in need of standard eye care facilities.

“The latest impact partner is the Sarawak Society of the Blind (SSB). They have more than 1300 registered blind members in the region.

There is a social stigma about being blind or visually impaired in Sarawak and prejudice against the blind. People don’t want to be called blind or disabled.

“The result of this trip is that we have partnered with the blind society in Sarawak to support their activities in raising eye health issues. We also provided a financial donation, just like what we have done for the Blind Low Vision New Zealand and the Fred Hollows Foundation.”

“We have empowered them with a new set of diagnostics equipment and trained them on how to use it effectively. This would allow them to screen for diseases such as diabetic retinopathy, which is getting more prevalent among the global population nowadays.”

The oDocs team also had a successful trial of their next-generation retinal camera that can capture the image of the retina without any pharmacological dilation.

This saves time for specialists and makes it more comfortable for patients. Images of the retina can be acquired within seconds and patients do not suffer from any side effects of dilation.

The camera is compatible with a smartphone and has the full functionality of the conventional fundus camera but is significantly affordable, costing less than a fifth of a modern fundus eye camera.

“Most of the conventional fundus cameras are table-top bulky machines that are not really portable. They are costly and not something a primary care provider or emergency department could easily afford,” Dr Hong says.

Award-winning Dr Hong says the Dunedin company is planning to set up a presence in Japan later this year. Discussions are in place with a major contact lens company that supplies over 30 percent of the contact lens market in Japan.

The company will be raising seed capital of a minimum of NZ$500,000 around the middle of this year. It is exploring opportunities with New Zealand Trade and Enterprise, angel investment groups and equity crowdfunding companies.

Funds will be used for business expansion, research and development, and inventory, Dr Hong says.

“Visual impairment and blindness is a global problem, with at least 2.2 billion people suffering from this disability worldwide, according to the World Health Organisation. About 80 percent of cases are preventable or treatable.”