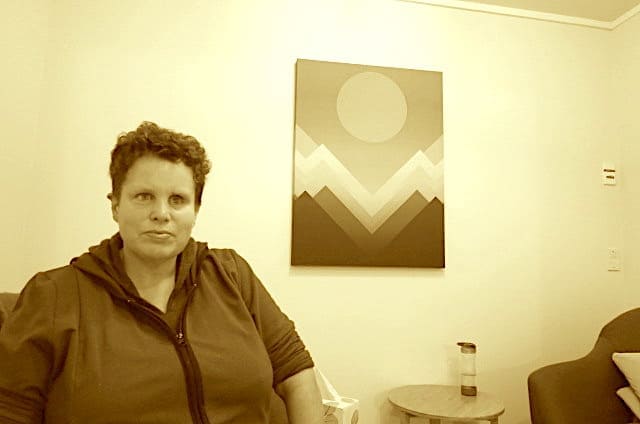 Megan Turnbull is a qualified psychotherapist and social worker with 20 years experience, loves reading and swimming, and makes scented soaps and candles. She’s been blind since age three.

However, what is important to her is the human connection.

“As people we have more in common than we have not in common.” She says this includes needing a sense of belonging, of being loved and a sense of purpose.

I aim to be a person who’s facing the things most people face in life. I do want to be understood – but I guess most people do.”

When working with people in psychotherapy and counselling, Megan doesn’t advertise that she is blind, because clients visit for themselves rather than her, she says. She tells them that guide dog Oban will be there, in case they have problems with dogs.

She’s realised blindness plays a role in the therapeutic relationship, with some clients finding it freeing because they don’t feel they are being judged visually.

Megan says there is much misinformation about those with disabilities. Some people patronise her and others are ignorant, expressing amazement that she can dress herself or board a bus. Others ask personal questions they wouldn’t ask a stranger who can see.

She finds these attitudes difficult; also some presumptions, such as that a blind person wouldn’t watch television.

She says research has shown that one of people’s biggest fears is blindness. Some think they couldn’t adjust to, or cope, with blindness.

They only see the blindness and don’t see the human under it.” 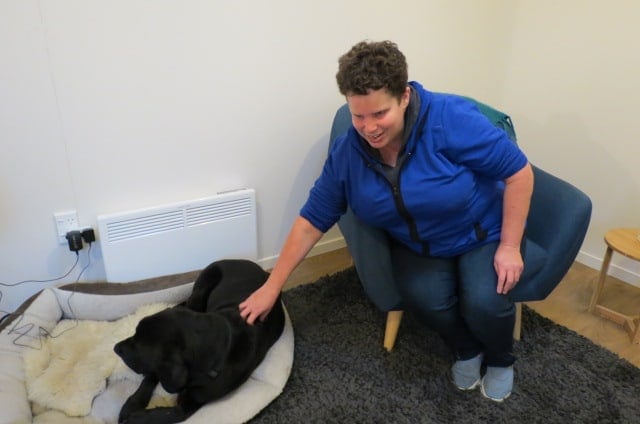 Megan Turnbull with guide dog Oban. “I really enjoy working a guide dog. It’s that team aspect of it.”

Moved away from family

Megan was born in Dunedin and went to Homai College for the Blind in Auckland for primary and intermediate school. This was in the 1970s, when blind children were usually educated in Auckland, rather than local mainstream schools as most are now.

At Homai College she learned Braille, touch typing and how to walk using a white cane.

“It was basically the normal curriculum but everything was available in Braille. A good basic education, but now kids are able to get that locally.”

While she learned many skills, being away from home was difficult emotionally for her entire family, she says. From age five to 13, she only returned home for school holidays.

It is really hard going away from your family. I’m really glad that they don’t have that now,” she says.

“I came back here for high school, which was a relief for everyone.”

Megan attended Queens High School in Dunedin, which she says was really welcoming. Some of her teachers learned Braille to assist in teaching her.

The road to employment

Having completing a Bachelor of Consumer and Applied Science degree at the University of Otago, Megan later gained a post-graduate Diploma in Social Services (Distinction).

A high proportion of blind people are unemployed and so she considered it important to gain specific training, she says.

She was employed as a social worker for the Child and Family Mental Health Service (CAFS), part of the district health board. Early on, she recognised that she needed more therapy skills for the “very delicate” work she was doing mainly with parents.

So, Megan continued working and trained part-time with the Gestalt Institute of New Zealand for six years, qualifying as a psychotherapist.

After working for 10 years at CAFS, she spent a further 10 years working as a counsellor at Student Health at the University of Otago.

Megan finished there at the end of last year and is developing a private counselling practice. She will also provide workplace counselling and as a registered social worker, will carry out clinical supervision for social workers.

In her free time, Megan has started making scented candles and soaps. 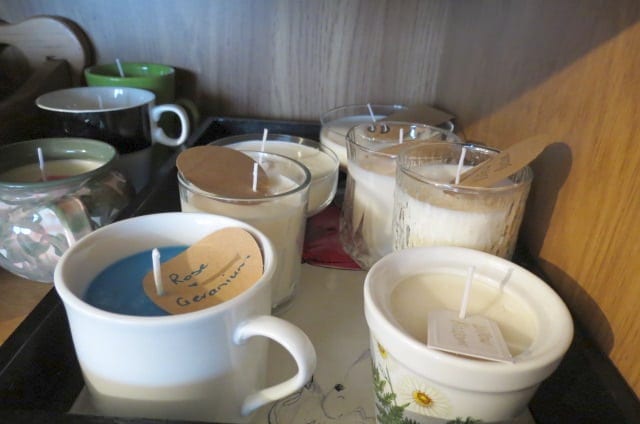 A fragrant smell…some of Megan’s candles, made in recycled cups and glasses.

“It’s a really nice balance to work…it’s something active, something you get a product at the end of.”

Swimming is another hobby.

“I really love swimming, I guess because it’s a form of exercise where blindness doesn’t matter – the only thing you can bang into is the wall at the end of the pool!”

At the end of our conversation, I ask if there is anything Megan would like to add.

I don’t think that I’m extraordinary in any way. I’m just a person living their life, wanting the things from life that most people want.”

Megan’s honey-based soaps are sold under the Smelly Business label and her scented candles, under Valley Wicks & Reeds.