Shari Roy grew up not knowing her language or culture and, indeed, not thinking much of herself in terms of being Māori.

The Whangārei schoolgirl studied German and French at high school, was the only Māori in her class and, by the time she left school, didn’t connect with being either Māori or Pākehā.

However, falling in love with a boy who wanted to be Māori was the start of a turnaround which, years later, sees her comfortable with who she is. She is learning te reo, the language, and tikanga, which includes deep-rooted values, customs and culture.

Shari’s iwi or tribe is Ngāpuhi and her parents are both Māori yet, when she was growing up, her close-knit family didn’t have any connection with a marae.

When her maternal grandfather was a child, he was beaten for speaking his own language, Māori.

“He didn’t last long at school – he just went out hunting, that was his thing,” Shari says. Her grandad enjoyed hunting and it was a way to feed the whānau, for which, as the eldest child, he carried much responsibility.

Although her grandfather never stopped being Māori and practising this way of doing things, he brought up his children without te reo. Shari says he didn’t share the language with them because it had been against the law to speak te reo at school and he was discouraged from speaking it at home.

For Shari, other than one week of learning te reo at intermediate school, the language wasn’t offered as a subject at school, although French and German were. All her friends were Pākehā – New Zealanders of European descent.

“I didn’t think much of myself in terms of being Māori,” she says.

I’d kept away from my people because as a child I believed that Māori were no good.”

Things began to change when Shari met Chris Roy, a Pākehā from Dunedin, who’d arrived in Whangārei as a boy and “fell in love with every brown-skinned person he met.”

Chris wanted to learn te reo and to be Māori, which he thought was cool. He knew more about tikanga than she did.

The pair met when Shari was 19, and married when she was 24. A year later, she became a Christian and asked God why he’d made her Māori.

She says understanding the answer took years, as her relationship with God developed and He taught her who she is, as a Māori person and a Christian.

“My journey is finding out my purpose, my why, my identity.”

The couple moved to Dunedin, which was another factor in her turnaround, even though the South Island city has proportionally fewer Māori residents than most North Island cities. 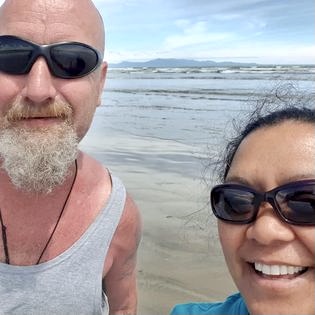 Together for 31 years: Chris and Shari Roy. Photo: supplied

“I thought that was the last place I’d learn te reo,” she says. “It’s kind of like coming to Dunedin is discovering who I am.”

In 2007, Shari began properly learning te reo and tikanga. She was a kaiāwhina, or assistant, at the Te Reo programme at Te Wānanga o Aotearoa until 2012. She’s continued working there as a kaitiaki, or home-based learning assessor.

She says that by being Māori, she innately knew words and customs, although didn’t realise this until she started learning. English is her first language and, for her, this has been a barrier to connecting with being Māori and understanding tikanga.

As part of feeling happy about her identity, Shari doesn’t try to be someone she isn’t. She says this extends to accepting her lack of experience in te reo and tikanga.

Speaking about race-based perceptions, she remembers that when they were younger and were flat-hunting, white-skinned Chris would approach the landlord and they’d get the flat, but they wouldn’t if Shari tried.

When she was younger Shari hadn’t realised Māori were oppressed.

“It seems like an invisible thing around us that says Māori are no good,” she reflects. She says you feel it even when nothing is said.

Shari wants to keep focusing on things Māori and reaching out to Māori people, yet desires to connect with everyone.

“I think it is important to love all people, like Jesus said, to ‘love one another’.”

A mutual friend describes Shari as “Miss Sunshine” and, when we first met at a cafe, she greeted me with a warm “kia ora” and hug.

Even at McCafé in South Dunedin, she was busy sharing the love.