Laughter and focusing on exercises you can do are some of the reasons breast cancer survivors enjoy EXPINKT gym.

“We laugh. When you enter the main door in the morning, you can hear the laughs,” Dunedin resident Helen Douglas says.

The friendly, welcoming gym is unique in New Zealand and, in some aspects, in the world. It was established after the diagnosis with breast cancer for the friend of a University of Otago Exercise Sciences Associate Professor.

Gym-goer Lynley Nesbit says she’d be terrified to go to a normal gym, whereas at EXPINKT, specially-trained staff provide exercises people with cancer can accomplish without hurting themselves.

“They give me some things I can do that make me feel like I’m actually doing something,” she says.

It’s amazing all the things you can actually do.”

After a diagnosis of stage four breast cancer, Lynley’s doctor referred her to EXPINKT. The active karate teacher says that when undergoing chemotherapy, it’s important that the chemicals move through a person’s body, and working out helps.

Her favourite activity is pumping the dumbbells and she’s progressed with lifting weights.

Asked how she feels after a gym session, she says, “Good. ‘Cause you’ve had a good yarn with everyone else.”

Both women say that gym-attendees understand what each other is going through and feel supported rather than put down, for example when they can’t lift as heavy weights as usual.

“A great team of people…all the team here, I just can’t say enough about them.” Helen says she was diagnosed with stage one breast cancer and has a good prognosis. She started at the gym in August, so can’t yet lift weights as heavy as Lynley can.

EXPINKT is definitely beneficial for her and one facet Helen appreciates is the many older people exercising.

She didn’t know much about cancer before being diagnosed and says the disease should be discussed more. A regular mammogram detected the cancer and Helen is grateful for her speedy, quality treatment through the public health system.

The pair want to thank the woman who established the programme.

That woman is Lynnette Jones, Associate Professor at the University School of Physical Education, Sport & Exercise Sciences. She set up EXPINKT primarily so women with a breast cancer diagnosis can exercise in a safe, supervised and supportive environment. 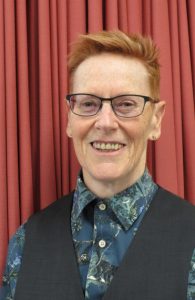 The programme celebrates its 10th birthday this year. It’s the only such programme in New Zealand and is unique in the world because oncology staff can refer patients directly to it, Lynnette says.

A “fantastic trust” has developed with Dunedin Hospital oncology staff. If more money is raised, the programme may expand to include other cancers, resulting in more male participants.

EXPINKT began after Lynnette supported a very close friend, Chrissie, through a breast cancer diagnosis. Interactions with Chrissie’s oncologist and oncology staff led to a chance conversation with a clinical nurse. As a result, EXPINKT was born and Chrissie saw it running before she died in December 2009.

“She knew that the programme had been developed. So, for me, it’s a very personal involvement. I get to work with amazing people, as my friend was.”

Research shows that exercise is incredibly beneficial for those with a cancer diagnosis, Lynnette says. Even if someone hasn’t previously been fit.

EXPINKT focuses on exercises to increase strength and heart and lung fitness. When someone has breast cancer, upper body activity is important for regaining strength. Shoulder disability can be a problem post-surgery, she says.

Another advantage of a specialist gym is that the equipment is cleaned frequently and those with contagious bugs are kept away; thus reducing the risk of infection. Chemotherapy can decrease the body’s immune system.

Clients have ranged from 26 to 93 years old and most work out at the gym twice a week, some more often and some less. Camaraderie is strong.

“The social interaction is very important – no one has to explain themselves here….Everybody knows, they’re all in the same boat.”

During the past 10 years, more than 420 people have been referred to EXPINKT, the majority of these with breast cancer and the majority women.

A trial outreach programme is being launched in Queenstown for people who’ve completed treatment.

Lynnette has worked for 20 years at the Physical Education department, which has been “incredibly” supportive, funding the gym and a trainer’s salary. During its 2019 sesquicentenary, the University is raising money to employ two trainers.

The name EXPINKT is used to represent ‘exercise training beyond breast cancer’.