A new programme called Jade Speaks Up (JSU), being piloted in school classrooms, is improving wellbeing by building stronger teacher student relationships and creating a greater sense of safety for many children.

Learning phone numbers of people they can trust and knowing a safe place to go are among the tools the children learn to keep them safe from violence.

Jade Speaks Up (JSU) provides teachers with more resources to discuss with children. Topics include emotional literacy, the importance of having trusting relationships, the fundamentals of respectful relationships and how to keep children safe from violence.

More than 4000 students and their teachers in Years 5-8 (ages 9-12) have participated in the three-year pilot funded by ACC.

The programme, whose central character, Jade, is named after precious New Zealand pounamu, was created by Elaine Dyer and Andrea O’Hagan. Both are trained primary teachers and their other work experience and studies have included conflict resolution.

Their paths eventually crossed and the programme was born out of Elaine’s work with people in the community and in prison.

Andrea had also worked alongside a secondary school counsellor and became more aware of the challenges some students had to deal with in their lives.

The research component of the three-year pilot of Jade Speaks Up was undertaken by Dr Geoff Bridgman, a lecturer and academic leader of social practice at Unitec. He was also the chairman of Violence Free Communities when the Jade programme was developed.

Elaine says the education curriculum has an expectation that schools will contribute to learning experiences for students that develop resilience, build personal coping strategies, and encourage accessing help and support from adults when needed.

Saving kids from ‘the highway to prison’

Schools were chosen for the programme delivery as Elaine recognised the need for early intervention, especially for some children who could be “on the highway to prison.”

Initially, West Auckland and Eastern Bay of Plenty were chosen because that’s where Elaine and Andrea live, so they could most easily provide the professional learning development days for the teachers and on-going teacher supervision, as well as conducting follow-up interviews. Andrea, left, and Elaine, training mentor teachers to use the Jade Speaks Up programme.

Mostly urban schools were involved and there was a wide range of cultural composition and decile.

Schools that were already part of the Ministry of Education’s initiative, Positive Behaviour for Learning – PB4L, were chosen on the assumption that they would already have a baseline of policies and practices in place to deal with issues, such as disclosure, and a staff group, which would be proactive around supporting their students to deal with challenging behaviours.

In the second and third years, schools in Dunedin and Christchurch became involved because they heard of the programme and believed it met their teachers’ needs for resources to address the topic of keeping children safe around violence.

“We expected relationships among students and between teachers and students to improve because personal storytelling helps remove assumptions about people and their behaviours and develops empathy. That links to improved well-being so we expected some improvement in the children’s well-being,” Andrea says.

“The improvement in children’s well-being was beyond our expectations.

“In 2017, the children’s well-being improved by 11 per cent, which matches having had 10 one-on-one counselling sessions. For teachers to have an impact on their students’ well-being that matched counselling therapy through a programme taught to the whole class was very significant.”

They did not expect children aged between 9 and 12 to not know even one trusted person’s phone number and were delighted to hear that they became more likely to know safe phone numbers in the post-test, which continued into follow-up.

And in the naming of safe places, there was a significant shift that we didn’t expect from naming home as a safe place to naming relatives’ homes as safe places.

“This shift may have been the result of children being asked in JSU to explore wider options than home and this is a positive shift,” says Elaine.

Andrea and Elaine say their greatest joy from creating the programme is hearing from teachers about the engagement of their students.

“Stories of students asking when ‘Jade’ was timetabled because they valued this kind of learning experience where their voices were heard. 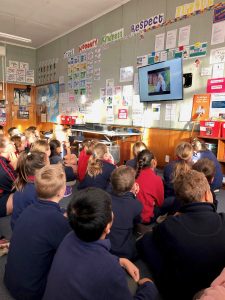 Children at a Christchurch school watch the Jade Speaks Up programme.

“Hearing of the depth of children’s insights into family circumstances, such as lack of money, that lead to stressful, heated arguments in the home was hard for us but also a relief because we knew that children sit on these stories when they are at school.

“Their behaviour is sometimes the only signal that something is wrong in their lives, if they aren’t provided with safe structures to talk about what’s happening for them,” says Elaine

Relationships between teachers and students were built upon and extended by the conversations sparked by the programme. Teachers observed that their students felt freer to talk to them about school, home or friends.

“Some teachers were reminded of the values that had initially motivated them to become teachers – usually values of wanting to be a positive influence on the lives of their students.”

Teachers realised more fully what some students were dealing with.

“We had comments from teachers such as: ‘[We appreciate the] full break down [provided in the programme] of how to help students who come from violent homes but are too scared to talk!’ Another said it ‘made me realise I didn’t know as much about my students’ home lives as I should’.”

Elaine and Andrea say every teacher with Years 5 – 8 classes could use modules 1-3 annually to develop emotional literacy skills, knowledge of what ‘trust’ involves and strategies of self-calming to begin the year.

“And because children across all sectors of society experience scary situations beyond their control, we would hope all schools will carefully consider including the second stage of modules, 4-6, which more specifically, cover domestic violence and children making safe choices.

“Our goal over the next five years is to gradually expand the number of trainers in our team so we can reach 500 schools to provide professional learning development and support for their teachers.”

In the interim, Elaine and Andrea will begin to train other trainers in 2020 who can support schools in their areas.

The full report on Jade Speaks Up click here