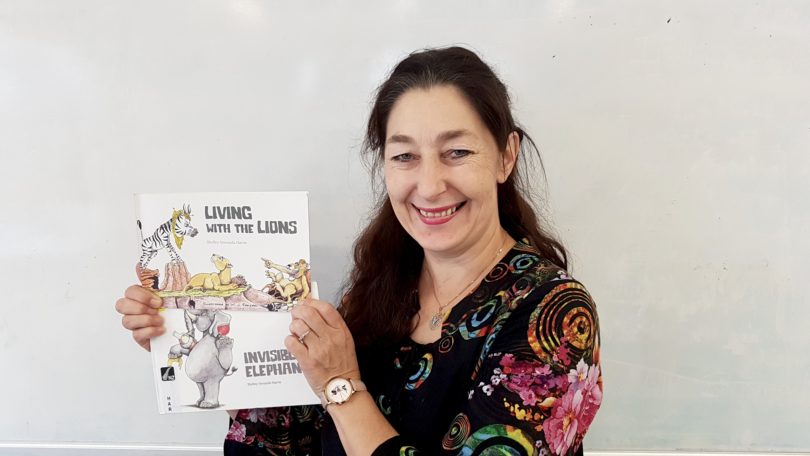 A Greymouth writer’s storybooks about lions and invisible elephants are helping Kiwi children navigate challenging family situations that can often be difficult for them to understand.

Author Susan Nonanda Smith draws on her own upbringing as a child adopted into a dysfunctional family.

Born to teen parents, her mother, 17, was in anguish about her baby’s future and was required to decide if she should give the baby up for adoption before the baby was born.

Not wanting to give her up for adoption she agreed that her baby could be “loaned” to a family. She made a private arrangement with a foster aunt she thought she could trust.

However, rather than being loaned Susan was immediately adopted into a family that had its own challenges, including alcohol.

Living with the Lions is about the challenges an orphaned grass-eating baby zebra faces after being adopted by meat-eating lions and mirrors Susan’s own story.

Birth parents wanted her back

“Unfortunately, my adoptive mother was going through her own issues and needed a baby to love,” Susan says.

Susan’s parents later married and were trying to get her back.

“I know that my birth mother had sought help from a lawyer and was still trying to get me back up until the night she was killed, aged 21. She was killed as she was catching a ride home as a pillion passenger on Moorhouse Avenue in Christchurch, by a young drunk driver who ran a red light.

“My father, a pretty rough diamond, tried to remain in contact with me but was blocked by my adoptive family and I didn’t find out anything more until he sent me a letter when I was 16. He had thought about me all those years but knew that he would not be able to see me.”

Her father, who was now living in Canada, simply addressed the letter with the name of his daughter and Greymouth, where he thought she still lived.

How could a letter sent to a town with no address, to a girl who no longer even lived there, by a father who didn’t even know if his daughter was alive, let alone in a mind to reply, left in ‘return to sender’ for 29 days and due for return back across the sea the following day, have reached me? It is simple, I believe in miracles,” Susan says.

Reunited with her father

A friend, who had a job relieving at the Post Office, saw the letter and it was delivered to Susan, via her high school, reuniting her with her father.

Susan learned her father’s parents were living in Christchurch. Her adoptive mother told Susan to choose between her and her birth family. Susan left home and was taken in by a kind elderly couple from the church she attended.

“Meeting my grandparents was like coming home, there was an instant connection, their bookshelves were full of familiar titles and authors, and our conversations revealed a number of ‘coincidences’ and affinities. Finally, I had found my place to belong.”

She also learned that after her mother’s death, her father had married another Kiwi girl and they had a son who is nine years younger than Susan.

Mirroring Susan’s early years Invisible Elephants is about a little girl living in a dysfunctional family with alcohol addiction and the complications of adults refusing to believe anything the child says.

In the book, the little girl grows up and writes for her grandchildren. She draws on the faces and places from her childhood.

Living in a house that had seen better days, an environment anything but homely and comforting, and facing effects of alcohol consumption during the day and thoughts of being chased at night by monsters that lived under the bed are memories of her earliest years of life.

“My nanny told me that when she was little, an invisible elephant moved into her house. The kind that only kids can see. Her invisible elephant was called Alco Holism and it caused her a lot of problems because the adults around her didn’t seem to notice it had even moved in. Now that’s pretty silly isn’t it?”

Susan publishes the books under her birth name, Shelley Nonanda Harris. Her father lived in a small fishing village in British Columbia.

Susan’s paternal aunt was given the name Nonanda by the local Nuxalk people. That name was passed down to Susan.

Nonanda is the name of a small flower that grows high up in the mountains and means “home of the grizzly bear”.

Susan has always enjoyed writing, poetry and drama. After her youngest child started school she trained as a teacher and studied writing and drama.

As well as teaching on the West Coast, she also runs Limelight Drama School which she founded about 15 years ago. Susan Nonanda Smith with husband Andy eating out in Japan

Trialled in the classroom

She has trialled the books in her classrooms at the school where she is a teacher and they have been a hit with the kids.

I want to help kids to understand and overcome adversity. I know these books do reach people.”

It has also prompted “amazing conversations” with those who have read them.

The two books are illustrated by a friend, W J Ramsden who she attended school with.

Susan has self-funded both books and is keen to sell them to individuals, schools, libraries and organisations where they will be helpful resources.

She hopes sales will help fund the additional books she has in the pipeline.

One is about a youngster starting school and what they will need to know to get them started. It’s written from the perspective of advice from a grandmother/teacher (Susan and husband Andy have nine grandchildren aged 2-10).

Written from her “my nanny” perspective it includes tips on how to make friends, the difference between playing and learning and practical advice about where to put their schoolbag, eat lunch and even find the toilets.

For copies of Susan’s two published books, Living with the Lions and Invisible Elephants: