Today we profile two of Wellington’s street people. These are people who are so easy to judge, ignore and reject.

Nevertheless, they are human beings and by telling their story we are hopeful that there will be softening of hearts towards them and even a little more kindness.

Shirley Duncan who regularly walks the streets of Wellington to talk to street people, shares their story from her perspective.

Michael has been a regular on the streets of Wellington for twenty five years.

He had a serious brain injury when he was born and has suffered from that all his life. He tries to supplement his meagre pension by juggling, which he is extremely good at. 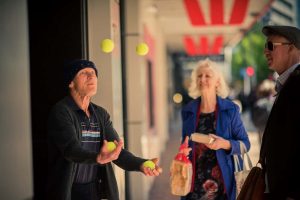 He is seen on the streets in all kinds of weather. Often during the winter he is still juggling even though his hands have gone blue with the cold, and the wind whistles through his meagre jumper.

For all that Michael has had to contend with, I have never seen him lose his smile. Without fail, he greets passers-by with a friendly grin and is always positive that they are going to give him a coin.

Michael will happily talk to people and his simplicity, openness and approachability are charming and encouraging. 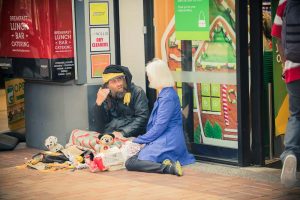 Daniel is often seen sitting outside one of the shops in central Wellington. He has overcome much hardship and disappointment in his life.

As a child he nearly died, twice. In fact, if it weren’t for prayer, he probably wouldn’t be alive today, but this man has a purpose in life. A traumatic motorbike accident fractured his spine in three places causing constant on-going pain and putting most jobs beyond his reach.

Daniel has also suffered the loss of close members of his family and the murder of a homeless acquaintance. He has fought depression, emotional and physical pain, and has suffered verbal abuse from passers-by who have not stopped to hear his story – many presuming he is on drugs.

In spite of this, Daniel has a cheery word to say to everyone. He returns good for evil; when abuse comes his way he gives a blessing, he empathises with others in adverse circumstances and has a true heart of compassion.

He has been on the streets for five years and met hundred’s of people. He says, “I’ve talked to Japanese, Muslims, English, Asians, Africans many cultures and backgrounds and found good in them all.” 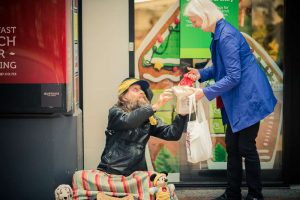 Daniel handing over excess food to give out to other street people.

When well wishers give him food, and many do, if he has anything in excess of his own needs, he gives the rest away to other homeless who have less and are hungry.

Daniel has a gentle spirit, a generous heart and a genuine desire to bestow blessing and love on everyone who passes him by, regardless of their attitude towards him.

He may not realise that to those of us who have stopped to hear his story and to bless him, and he is, in turn, a blessing to us.

In fact, if he was not seen on the streets of Wellington for a period of time, many people would be concerned for his wellbeing. 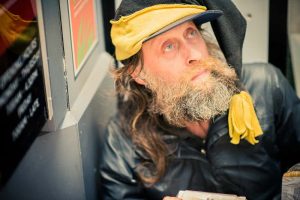 I personally have been greatly encouraged by Daniel. Knowing what  he has suffered and still suffers on a daily basis – pain, abuse, being misunderstood and rejected, and seeing him give out to others with such love and compassion, inspires me to do the same.