Love, care, attention and the jiggle of his four-wheel pull along cart, has got 15-year-old-corgi Oscar smiling again, as well as his devoted owner Margaret Holloway. Once paralysed in his back legs his recovery story is going to be the subject of an Upper Hutt school study on ‘never giving up!’ 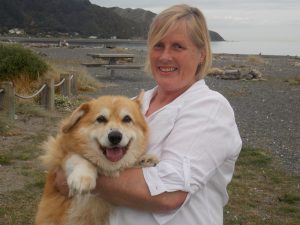 Margaret Holloway holds her beloved dog Oscar on the beach at Eastbourne.

Margaret, an Eastbourne local of 38-years has become a familiar sight and source of great interest as she happily pulls Oscar’s cart on his twice-daily outings around the small seaside community. The uneven footpaths (sloping down from the middle) to the rough shingle lighthouse road have been ideal for his ‘jiggle therapy’, she explains.

But just as important as the jiggle therapy, designed to stimulate the nerves and muscles left damaged by what Margaret believes was an undiagnosed stroke, has been the loving care and attention of the community.

“Immediately when we took him out in his cart all the kiddies came up patting and cuddling him and saying he was just so cute sitting there. He quickly perked up. Life became good again and that is I believe two-thirds of his recovery.

“We’re all mammals and we all respond to attention and care. His eyes were bright again, his tongue was hanging out, he was having a good time,”explained Margaret.

The trolley brings out the dapper man

“The other funny thing is he stands up in his trolley and barks as though he’s in a car with his head out the window.

He’s become the dapper man because when there’s a female dog he wriggles up the trolley and sort of says ‘hop on in if you like’ but if a male dog comes along they’re not allowed near.” Oscar lost the use of his back legs 18 months ago and it looked like there was nothing to be done for him after all the usual vet tests.

Margaret’s stoic attitude, “They’re not a handbag – they’re a pet,” and her belief in the importance of attention and stimulation, something the elderly also need she says, led her to try to help beloved Oscar.

He was getting quite depressed sitting in a corner of the kitchen looking at Margaret as if to say ‘what’s going on’.

“We love our dogs and so we said this is no good. You wouldn’t do it to a human. Lets take him out, lets get him into a trolley so he can have his walks like he used to.

“We’d heard about jiggle treatment for human stroke sufferers by this stage, so my husband and I said lets build him this trolley which he can lie in and watch all the world go past,” she said.

However, while the majority of locals were supportive some didn’t really understand the Holloway’s decision and told them they should put Oscar down and it wasn’t fair on him.

The day he finally walked after 10 months of cart walks, Margaret was jubilant. He had always barked when he wanted to go outside or have a drink or it was his trolley walk time. So he barked to me and I was working on my computer and said “I won’t be a minute as you do” and the next thing I knew he was walking towards his water bowl!

“When he first started walking his head was held very low for balance and it was a real effort, explained Margaret.

“Now he walks with his head up in a more balanced way but still looks a bit like what I call a 4-wheel drive, its not extremely well co-ordinated.”

But Oscar doesn’t care, he’s up walking, and he’s getting faster. He can now jump out of his trolley but still can only manage flat ground.

Margaret is a self confessed Corgi lover, Oscar is her fourth, so it’s only natural Oscar has a facebook page. He now has 500 followers through the group I heart corgis.

“When I posted how he had lost the use of his limbs and was starting to walk again, he overnight had 500 followers,” she recalls.

We had people writing in wanting to know what we were doing. A lot of them had different and ongoing conditions to Oscars, explained Margaret, but in two undiagnosed cases owners were inspired to give ‘jiggle therapy’ a go.

School study on never giving up

A St Bernard’s Silverstream school teacher saw Margaret with Oscar and said they were doing a programme on how you never give up and asked to follow Oscar.

We’ve already sent photos and videos of Oscar and now we’ll send them this article too. I think Oscar’s story also is a lesson on how to treat the elderly,” says Margaret.

Margaret, who is married with four adult children and has a small biotechnology business hopes the future for Oscar will continue steadily improving. But says “It doesn’t matter it doesn’t matter. He’s up , he’s walking and life is good. We are aware he is getting on to 15 years but his dad lived to 17 years so there’s no reason why he can’t too!”