Coming to live in a land of “greener pastures” has shown Carlito Uy that dreams can come true.

Ten years ago carrying simply a backpack, he left a job, wife and two young children in the Philippines to fly to New Zealand for work.

He had wanted to leave his home country for a long time, for economic reasons and because of corruption and not wanting to bring up children in that environment.

My chances were slim but I just kept on dreaming,” Carlito says.

“The dream was to get, how do you call it in English, a greener pasture – for my family.”

In the Philippines, he spent 14 years as a Department of Health technician, servicing infant incubators, autoclaves and electrocardiograph machines.

His experience, skills and work ethic contributed to him being interviewed in the Philippines and granted a visa to work in New Zealand as an autoclave service technician. He is one of only two people in Dunedin doing this job. 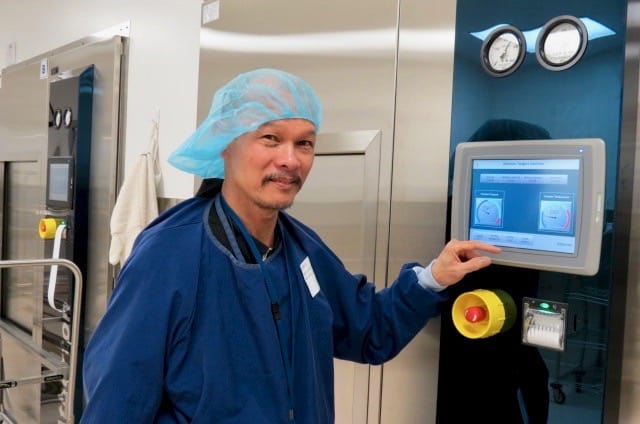 Carlito (57) has now been in this country 10 years. Standing outside Dunedin Hospital, he mentions how years ago he’d told his mother of aspirations to become a doctor. She’d said the family didn’t have money for that.

“Look where I am now – [working] in the hospital. You never know life, right?”

He views his work as public service and says that while not a doctor, he indirectly cares for patients through maintaining and sterilising autoclaves.

Having arrived in Christchurch, New Zealand, in 2008, Carlito worked hard and sent wages home to his immediate family; and extended family when they asked for or needed money.

“That’s part of the dream, to support my family.”

It was difficult being apart from his wife and children: “We were separated for maybe two to three years. It’s not good for the kids. Then we have the Skype.”

They were reunited in 2011, when his wife Sarah and children John-Paul (7) and Charisse (3) arrived in Christchurch. His daughter was a year old when her dad left the Philippines and they initially felt like strangers when reunited. Carlito Uy’s family: his wife Sarah and children John-Paul (left) and Charisse at Singapore Changi Airport during a trip to the Philippines. Photo: Carlito Uy.

More than a year ago, the couple, John-Paul (now 15) and Charisse (now 10) all became New Zealand citizens – so are dual citizens.

They miss Filipino food and relatives. However, after three years away, their son visited the Philippines and merely a few days passed before the youngster desired his New Zealand life.

My son speaks like a Kiwi. I don’t even understand him sometimes!”

Maintaining the Filipino connection is important and the family visits there every three or four years. Charisse is more expressive in her native Cebuano language.

In the Philippines, Carlito lived in Cebu City and trained as an electronics engineer. The German agency GTZ then trained him as a biomedical technician and he worked for the Department of Health.

After applying to migrate as a skilled worker to Canada, Singapore, Arab countries and Jamaica, he gave up applying when told he needed money.

Some time later, a Filipino friend living in New Zealand made contact to say that his employer wanted to hire Filipino technicians.

The owner-director of this company, Surgical & Medical Systems, flew to the Philippines for interviews and Carlito and one other technician were selected to work in New Zealand. This new employer bought Carlito’s airline ticket.

Carlito worked in Christchurch until its second significant earthquake and moved to Dunedin between 2011 and 2012.

The family shifted to Dunedin with only bags of belongings. His co-worker helped locate a rental home and arranged for Mercy Hospital to donate beds, blankets and towels.

Carlito works for Surgical & Medical Systems at Mercy Hospital, Dunedin Hospital, the University of Otago School of Dentistry and in Southland. Sometimes he travels to Auckland or Christchurch to back up the incumbent technician.

His job involves maintaining, repairing and validating autoclaves and washer-sanitisers. Inside operating theatres, doctors and other staff have their own tools. An autoclave sterilises these before staff handle them.

Experience and care are necessary because if the sterilisation procedure isn’t carried out correctly, patients could be infected. Safety is also important because high pressures and temperatures are involved.

Asked about his impressions of New Zealand, Carlito says “the system works”. He gives an example of applying for an IRD (tax) number. Instead of requiring much time and paperwork as in the Philippines, this simply took one visit to an IRD office.

“It’s safe here, the system works. If there’s a problem you can go to a Government agency, or ask for help.”

New Zealand is indeed “clean and green”, he says. Although he’s had to adjust to the culture, he instantly liked the people.

Co-worker Brian Lungley says Carlito is well-liked and known for being friendly.

Carlito responds, “Kiwi people are not difficult to be with. The feeling is mutual.”