In a wheelchair following a gardening accident, in 2011, the Lower Hutt tetraplegic continues her lifelong community involvement as much as she can “because I can sew and cook and speak.”

She believes her work in the community will extend her life and she enjoys the people it brings her into contact with.

She also teaches others to sew at the ReMakery in Epuni, Lower Hutt, bakes Christmas cakes for raffles and does talks about Time Bank.

“I feel I’m a good poster person for it.”

“Skills in sewing and baking are being lost,” she says.

She is hoping to help reverse the decline through the ReMakery and Time Bank.

“Even though I’m like this I can still give.

Anyone can give and have. I don’t want to be someone’s project but, instead, be a two-way achievement person.”

She doesn’t like being labelled because of her accident. 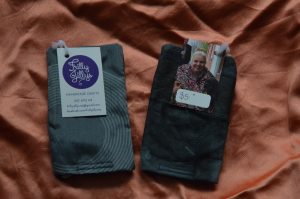 Jill gives fabric a second life as cases for glasses.

A supporter of the traditional concepts of recycling and sustainability, she also has her own small business turning redundant material, including sheets and duvet covers, into ‘artisan products’ that include aprons, shopping bags, glasses cases and tea towels.

“It horrified me that this material goes in the dump.

“I am hoping others will appreciate the philosophy behind it [recycling] and start to support sustainability.”

Voluntary work through Time Bank earns a person credits, which they can then redeem by having another member do something for them. One of the ways Jill earns credits is being available to give advice to people from other groups.

It’s very important to know you are still valued.

Valued for who you are and your knowledge,” she adds.

“There are a lot of things people have that they can share.”

She ‘spends’ her credits by having Time Bank members cut the fabric for her sewing and do jobs around the house.

Jill also sews Boomerang Bags for use in Petone. Participating shops hand them out instead of disposable shopping bags. Customers return them for reuse.

ACC paid for her two overlockers to be adapted for her continued use. Jill Lowry with some of the aprons she has made by reusing fabric. With her is her bichon poodle cross, Ebony. Photos: Rosemary McLennan

Raised to give back

A father involved in Lions, and a mother in church life, meant Jill was raised in an environment of community involvement and this influenced her as a mother and grandmother.

Jill, a trained primary teacher, taught for 18 years and, during that time, also raised four children of her own.

She travelled the world several times, wanting to do things with her life.

“I took risks rather than stay in a safe work environment.”

Her family owned Gem Resort in the Bay of Many Coves, Marlborough Sounds, for 10 years. They sold it and moved to Picton where Jill taught at Queen Charlotte College and was also involved with the Waikawa Marae.

She had her own catering business for many years and supported her children’s sailing ventures around the country.

How the accident happened

It was in her Picton garden Jill had the accident in 2011.

She stood on a loose tile on the edge of a garden bed and fell about a metre, hitting her head on concrete.

“Everything in life carries risk, “she says, “but home being such a familiar place, people can be less safety conscious.”

She was sent to Christchurch Hospital before spending nine months at nearby Burwood Hospital and its spinal unit. Her C3 and C4 vertebrae were broken and there was nerve damage to C6-7.

She watched young men able to leave hospital walking again and thought, They’re getting another chance at life.

Every tetraplegic is affected differently. Jill has no feeling from just below her neck.

Doctors didn’t expect her to be able to use her arms but she regained partial movement.

She can’t move her fingers but surgery has enabled her to grip with both hands.

She can use a computer “very slowly” so has a program where she can talk to it.

A similar arrangement allows her to text by talking.

“It’s is hard for people to understand the lifestyle of someone in this condition.”

Carers come and go throughout the day.

“I appreciate my carers very much.”

She also enjoys the diverse range of cultures they bring her into contact with.

The aim is for Jill to live as normally as possible through their help.

Her day begins with breakfast in bed followed by a shower and dressing. That part of the day takes two hours.

She kept her car, which a carer drives. Jill can’t get out of the car or into a building without help. Nor can she pick up items at the supermarket.

So the carer accompanies Jill and does the parts of her routine that she can’t. A carer also carries out her gardening instructions.

ACC has helped with house modifications.

“When you are a tetraplegic and have worked all your life you want to go back to work.”

In Jill’s case that’s not possible because she is prone to infections and recovery takes longer.

I still have a right to live a life as close to what other people do . . . but being a tetraplegic your life is very restricted,” she says.