Nahara, Anne-Marie and Pounamu manoeuvre a frame to construct a no-dig bed for their science project at Ōtāhuhu College
Share116
Tweet
Email
116 Shares

Could a bountiful and nutritious crop of cold-tolerant Japanese taro be grown in Auckland as an alternative to imported Pacific taro?

That’s the question students at Ōtāhuhu College plan to investigate.

It’s part of the latest round of STEM (science, technology, engineering and maths) projects where more than 400 young people in South Auckland will take part in SouthSci-funded projects to find science-based solutions to community problems.

SouthSci, a Te Hononga Akoranga – COMET initiative, is a part of Curious Minds, the Government’s strategic plan to encourage everyone in New Zealand to get engaged with science and technology.

Ōtāhuhu College teacher, Malcolm McAllister, says that when Samoan friends told him imported taro was expensive at $9 a corm, he wondered if the staple Pacific Island food could be grown in New Zealand. But there were negatives so he began to explore the Japanese cultivar of taro called satoimo.

“Satoimo is sweeter and softer than the Pacific taro. Island families prize the firm starchiness of the imported taro, which is drier, because of the distance it travels, than freshly dug taro,” says Malcolm.

I wondered whether the Japanese taro, which is more cold-tolerant, could be grown productively in Auckland, produce enough corms to feed a family, and be palatable to local tastes.”

As well as satoimo, the college project will also trial plantings of plantain, which looks like a firm banana.

Malcolm says it tastes like a large, sweet, firm banana but holds its shape when cooked.

“You cut it on the diagonal and fry it gently until it is golden brown. It complements spicy dishes like chilli beans. It is widely eaten in the Caribbean, in Africa, South-east Asia and across the Pacific.”

Both taro and plantain are high in nutrients and have a lower glycemic index than other starches, such as rice or potatoes.

Malcolm hasn’t tried satoimo but has often eaten plantain. Neither is part of the Auckland diet because they are not generally available.

“Imported green plantain, which is occasionally sold here, takes a week to ripen, which might put people off. Green bananas, boiled and served with coconut cream, is the staple here,” he says.

The college project received about $20,000 in SouthSci funding and has also received in-kind donations and contributions from many partners.

SouthSci manager, Ying Yang, says they were delighted to support the project “because it gives a scientifically robust educational experience for students while also tackling a problem that could improve the wellbeing of our communities, so it really ticked all the boxes for us.”

The project will involve planting different varieties of banana, including plantain, to see how they grow in a sheltered spot, how long they take to flower, bear fruit and ripen, and if growing in a circle or a line is better.

Malcolm says the focus will be on the best taste.

“If plantain were more widely available, perhaps more people would eat it,” he says.

“It cooks beautifully and goes with lots of things,” he said.

Malcolm says the students will draw on traditional cultural methods for growing taro with the help of local gardeners.

While Malcolm teaches art at Ōtāhuhu College he is a keen gardener.

When he heard the college wanted to do something with a disused horticultural area he got involved.

Working bees have been held to get the site cleared. A 60-person working bee on July 30 included students, staff and parents from the college (including its garden club), the nearby Papatoetoe East Primary School and staff from Bunnings.

The team created 57 no-dig beds on top of cardboard donated by Opal Packaging. The Ambury Park Centre riding school donated horse manure and Bunnings donated the compost and sleepers for edging. Mainfreight donated planter boxes and a shipping container, which they painted and transported onto the site.

A team from KiwiRail took the garden club for a maths day to measure up the garden then organised a team of four from Gleeson Civil to clear the top layer of kikuyu and gravel with their diggers and bobcats. “The garden team at the school would have struggled to make even a dent in the derelict area without the practical support of these companies,” Malcolm says. What a transformation. The Ōtāhuhu College gardens beds in August 2021

He says it is refreshing to see how keen the students are, especially those who have helped relatives tend taro beds here in New Zealand or worked on plantations or farms in the Pacific Islands.

Students will learn all the practical skills of gardening and how to make do on a budget. For example, to keep cats and pukeko away they have built bamboo frames to make netting cloches.

“They will learn all the basics of horticulture – soil types, plant anatomy, measuring growth, the importance of water and temperature and so forth, in a practical way,” Malcolm says. 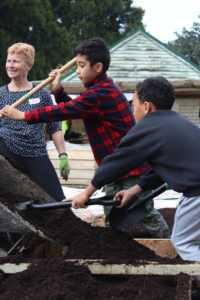 “We are still establishing the garden out of a derelict area. We have set up the no-dig beds for the simple reason of keeping weeding to a minimum. Now comes the next stage – getting the taro in the ground and planting out the rest of the garden.”

The college is looking for funds to buy other plants, including perennials, vegetables and herbs, and to set up water harvesting and irrigation in the area before summer. The shed and greenhouse also need repair.

Malcolm hopes they will get a good harvest of the quickest growing vegetables in the next few months. Produce will be offered to the students, the college’s hospitality department or sold to staff.

As the other plantings are expected to mature in late summer, the project will continue into 2022.

Ying Yang says they hope the project could foster interest in a horticultural career.

“There are so many aspects of STEM involved in growing crops. We hope that students will be exposed to all these different areas – from measuring the volume of soil required, understanding the nutrient cycle, to the biology of plants, and horticulture.

“This project is also connecting students with role models who work in different STEM industries and showing them potential career pathways, they could pursue.”

Here is a link to a paper on taro Janet Busch researched and wrote while she worked at Lincoln University.