Hawke’s Bay families are helping to save the planet by eating 700 tonnes of food every year that could otherwise end up in landfills.

It’s such a large amount because the Hawke’s Bay region is one of New Zealand’s major horticultural areas where fruit and vegetables are grown.

Until environmental project Nourished for Nil began, misshapen or under and oversize fruits and vegetables were often dumped, along with leftover food at local supermarkets and cafes.

Nourished for Nil was begun in 2017 by Christina McBeth and Louise Saurin.

Even as a child, Christina, who grew up in New Jersey in the United States, hated food waste.

Her family had a large vegetable patch and a pantry “heaving with preserves”. Preserves and surplus produce were given away, often to school fundraisers.

Christina was living in New Zealand when she heard of an organisation in France that redistributes food.  She made inquiries to see if that were happening here and found organisations in Wellington and Palmerston North.

why can’t I do it in the Hawke’s Bay?

Social media investigations showed no-one else was doing it in Hawke’s Bay and so the seeds were sown for Nourished for Nil.

No need to feel awkward

By focusing on minimising food waste rather than feeding people in need it would have a wider impact and no one would need to feel awkward about receiving food. 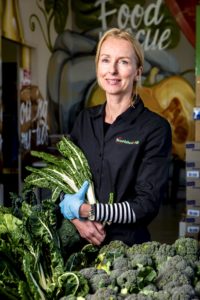 No one needs to qualify to accept food and recipients can take pride they are doing something that is good for the environment, Christina says.

She says modern life and fancy packaging have disconnected people from the food chain which makes it easier for them to throw good food away.

Christina says a third of food never reaches the plate because produce that isn’t the perfect size is often discarded between harvest and the supermarket and often ends up as pig food or is sent to landfill.

Christina says that in the early days collecting enough food to make Nourished for Nil worthwhile was challenging but things improved as the message got out and more businesses came on board.

Local fruit and vegetable processing plants also donate processed product that is not saleable due to defects including damaged labels. Donating the product saves them the cost of sending it to landfill.

Christina says the majority of food recipients are on tight budgets so it helps them save for other goals.

Nourished for Nil has three sites in Hawke’s Bay.

Their main site is a building in Hastings. Funding and the local council pay the rent. It’s the receiving venue for food that is donated or collected by volunteers.

The Napier site operates from a church hall.

Recently Nourished for Nil has opened a branch at Flaxmere’s community centre, run by that centre’s staff and volunteers.

A recent change at the three sites was having door greeter who holds a koha bucket.

Doing this was “a big epiphany on our part” and makes everyone feel better about receiving food items, Christina says.

It also provides valuable income to help run the organisation which has two paid staff, a core team of about 12 volunteers (including Christina) and around 60 more whose work includes food collection. The number of volunteers is large because they run morning and evening shifts.

Christina says Covid had a big impact locally and Nourished for Nil saw a large increase in local families attending a food distribution hour. But they also received extra food due to cancelled orders and many supermarkets ramped up baking.

The lockdown packed their two-year plan into six months because they were able to get Covid-related relief funds.

Overall the response to Nourished for Nil has been “amazing” and Christina can’t think of any detractors.

There is a lot of goodwill in the community and many private donations.

Christina hadn’t anticipated the positive social side for both volunteers and visitors to the three outlets. For some it was an important social outing and a place to care and be cared for. Christina says they have been contacted by people elsewhere in the country wanting to start similar organisations.

She says there is a lot of work starting up “but you grow with it”.