Hole-in-the-heart surgery has given promising young dancer, Ben Porter, aged 16, the passion for a career in medicine.

A dance injury temporarily took him off the stage; then a freak sporting injury revealed a life-threatening heart condition.

Keyhole surgery at Starship Hospital in Auckland then repaired the small hole in his heart.

This experience has inspired Ben to study medicine although his teacher says he has the natural talent for a career in dance.

Interestingly, before surgery, training to be a paramedic had crossed Ben’s mind because it would involve helping others. 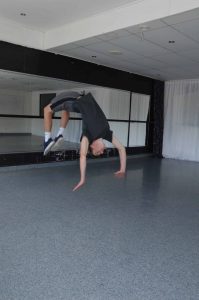 Ben demonstrates a back handspring) a type of back flip.

Ben has been dancing since he was four. His sister, Nicole, was learning to dance at Anita’s Dance Academy in Upper Hutt and he went along to watch.

Principal, Anita Perin-Zgomba, invited Ben to dance and he started lessons in ballet, jazz and tap.

A couple of years ago, during competitions in Lower Hutt, he tried a move he hadn’t done before and landed on his knee on stage.

A month later he was in hospital, and about to be wheeled into the theatre, when the doctors sent him home because his knee was too swollen to be operated on.

Over time, his knee healed and Ben began dancing again. During the break he had done some hiphop but found it tiring.

He then suffered a sporting injury at school, tripping and hitting his head on a concrete wall.

Concussed, Ben was taken to hospital where an ultrasound on his heart revealed a tiny hole that had been there since birth.

Ben had surgery in August 2016. Without this, his life could have been shortened by a massive 20 or 30 years.

He returned to dancing in early 2017, doing open jazz and contemporary plus acrobatics (which include flips and tumbling).

Has natural dance charisma and flair and has received standing ovations at competitions he has been in.”

He is very serious about everything he does, and his fellow dancers love his dedication,” she says.

“Ben has a bright future in dancing ahead of him,” new dance teacher, Charis O’Connor, says

“He has been dancing with me for a few months and is a pleasure to teach.

“He is a very talented dancer and, as an ex West End performer from London myself, I believe he can go down the same path and has what it takes to pursue a career in the industry if he so wishes.

“His energy and dedication make him a very unique performer, with such a bright future ahead of him.”

In March, Ben will take part in competitions and compete for scholarships with the hope of adding to his medal haul from before he was injured.

“Dancing is a way to express yourself,” he says.

“It is kind of, like, there is something free about it.”

Several years ago he donated the Ben Porter Trophy for the contemporary dance section at the Upper Hutt Competitions to offer encouragement to dancers younger than himself.

Ben is a student at Hutt International Boys’ School where he has completed his NCEA Level 1 year and, with medicine in mind, will specialise in sciences in 2018. Ben gained NCEA Level 1 with excellence and received excellence endorsements in English, physical education and science.