When life becomes a nightmare, you just want to cuddle a teddy. A Greymouth craft group has made it their mission to bring comfort to children involved in traumatic incidents.

In Stitches is a craft group led by Maureen Simpson. It meets twice a week to knit and stitch together and give back to the community.

Settling In Co-ordinator at New Coasters, Birte Becker-Steel says, “As part of the ‘It’s Not OK’ campaign, I recently became involved as a Community Champion against family violence.

When I thought about the effect traumatic incidents have on kids, I wanted to do something to help.”

Birte approached the craft group about producing Trauma Teddies to be distributed to children who have experienced family violence and other traumatic incidents. 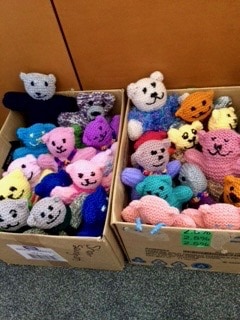 A sleuth of teddies boxed up and ready to go: Photo Maureen Simpson

Trauma Teddies are not a new idea.

The term transitional object is used in psychological practice to refer to an object used to give comfort to a child. A teddy, blanket or other object consoles the child as they become aware of themselves as separate from other people.

With this awareness, comes the sense of a loss of part of themselves and the teddy subconsciously becomes a substitute for this lost part. Teddies have been repeatedly shown to reduce feelings of anxiety and induce feelings of security.

Most people will be familiar with the idea that a teddy helps settle a baby and this comfort can extend long into the child’s later years.

In 1990, Richard Hamilton of the Campbelltown Ambulance service in New South Wales, Australia noted the calming effect of a teddy bear on a child being treated in an ambulance. He enquired with the Australian Red Cross about making more teddy bears available to juvenile victims of trauma.

Norma Elder is credited with arranging the original knitting pattern. Since then, thousands of volunteers from organisations all over the world have knitted ‘Trauma Teddies’ to comfort children in distress.

In some places, first responders even carry them in their vehicles.

Sgt Andrew Lyes of the Greymouth Police says, “It’s a great idea which could make all the difference for vulnerable kids processing some difficult experiences.”

Maureen responded eagerly to the call, urging fellow members of ‘In Stitches’ to get behind this appeal. The response was much more enthusiastic than anyone expected. 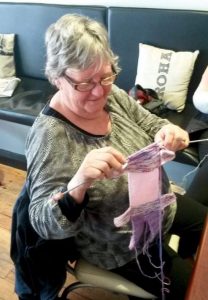 Helen McIntosh knits away at another teddy

The plan was to begin producing Trauma Teddies at the upcoming Knit in Public Day. But members were keen to get started and they quickly exceeded their original goal of 50, by making over 65 bears.

Many more are at various stages of completion and their new goal is to make 100.

Maureen says, “I think this has been the most popular of our projects”.

Other recent projects include making slippers for children in need at the beginning of winter. There are other groups in Greymouth doing similar things for charitable causes and there is no reason why more could not start.

If you’d like to support this initiative, you can donate wool to Pins and Needles on Mackay Street in Greymouth or download the pattern by clicking here  , knit your own and drop them your finished teddies.

Alternatively, you can join them at their Knit in Public event on October 6th from 10-12:30 at the Greymouth District Library or join New Coasters’ other knitting group in Hokitika on the same day.

More details can be found on their Facebook group: In Stitches Greymouth.