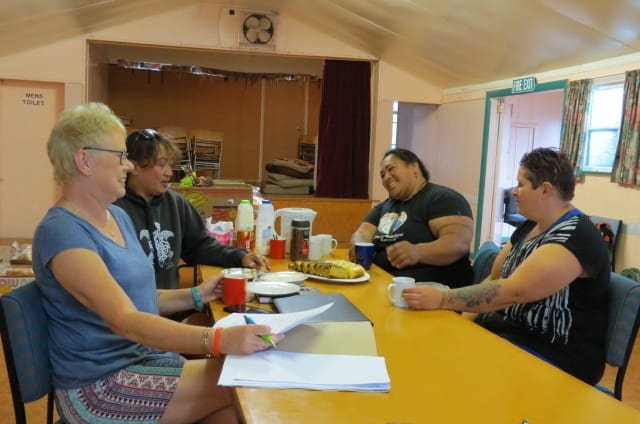 The Corstorphine Hub in Dunedin is helping bring facilities, life skills and community spirit back into a suburb where some families struggle with everyday needs.

We’re basically doing what was intrinsic to communities 30 to 40 years ago,” Hub Coordinator, Mere Jouanides, says.

“The Hub’s grown and is still growing,” Mere says.

During this past December and January, the Hub moved to the Corstorphine Community Centre in Middleton Rd. It is trying to provide as many regular services as possible, although needs to upgrade the hall and plant a new community garden. 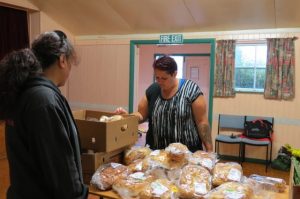 The Hub also offers free food, a homework group and a playgroup.

“We try and provide people with what we can … everyday essentials,” Mere says.

Public transport is too expensive for many Corstorphine families. She says it costs as much as $40 for a family with two school age children to travel into the city centre and return, twice a week.

“We need to start bringing some facilities here, to Corstorphine.”

People can walk to The Corstorphine Hub and buses stop nearby. 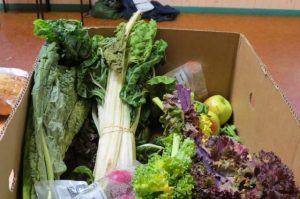 Some of the fresh produce available, particularly for those on low incomes, at the Corstorphine Hub in Dunedin.

Many families are dependent on Government social welfare benefits and “very large” Pacific Island families live in the suburb. “It is a tight-knit community,” Mere says.

One of the Hub’s regular gatherings is Thursday lunch. Local residents prepare soup together, invented from ingredients donated by KiwiHarvest.

People who usually cook instant mashed potatoes learn simple skills such as peeling potatoes. Those who think they don’t like a particular soup ingredient often change their minds.

We turn the haters of broccoli and chickpeas into believers,” Mere laughs.

Mere says teenagers who came to the Hub as children now help with the homework group. Older children assist in catering for hui, or other gatherings.

The Hub is funded by Te Pūtahitanga, a partnership of nine Iwi, or tribes, which fund initiatives around New Zealand. The Hub also receives funding and support from the Department of Internal Affairs and Dunedin City Council.

The Lockerbie St Community Garden was popular and a new garden will be planted at Middleton Rd. Vegetables help families eat more healthily and cheaply, she says. People are encouraged to lend a hand.

Moana adds that at the Community Garden they say:

Local resident, Andrea Woodford, says she moved to the neighbourhood two years ago and a friend took her to The Corstorphine Hub.

People going through difficult times support each other at the Hub, she says.

The three women say many local residents who can’t afford to visit a cafe socialise at the Hub. They say there is a strong sense of community: people embrace others and aren’t critical of each other.

Enjoying a laugh and some kai at the Corstorphine Hub in Dunedin (from left to right): Secretary-Treasurer, Andrea Woodford, Garden Supervisor Moana Taana, Coordinator Mere Jouanides and regular, Cindy Spiers.

You come in the door, you’re family,” Moana says.

“People just fit in; it doesn’t matter what culture or anything,” Andrea adds.