New Zealand scientists have discovered our local glow-worm could play a role in combating serious diseases.

Prof Krause says that following much more research and development work, the glow-worms’ light could be used as a “molecular reporter”, to announce the location and production of important molecules in a cell.

This reporting is in a way similar to when a bell is put on a cat, the bell sounds tell those around that a cat is present.”

Prof Krause said for a disease such as cancer, it is important to know where its proteins and cells are, and the glow-worms’ light could help.

Another use of glow-worm chemistry might involve infectious diseases. For instance, if infecting bacteria being studied in the lab could be made to glow, then their growth and location could be monitored. This could be helpful in testing new therapies.

“For example, if an antibiotic candidate successfully killed the glowing bacteria, then its light generation would stop, which would signal that the antibiotic had worked.”

If the bacterial glowing persisted, this would show the antibiotic hadn’t killed the harmful bacteria, he says.

The uniqueness of the New Zealand glow-worm

The chemistry behind other “glowing creatures”, such as fireflies, is already used in such scientific experiments world-wide.

“We believe the novel chemistry of the glow-worms means their light may be able to be used in similar kinds of experiments.” 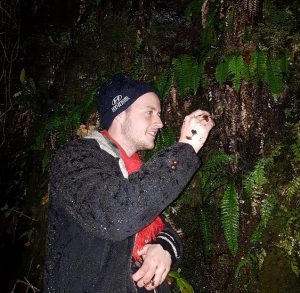 A University of Otago chemist, Dr Oliver Watkins, out in the scientific field with glow-worms.

However, this use of glow-worms is still far off. At the University of Otago, the excitement at present is more about the discovery of the chemicals that New Zealand glow-worms use to produce their light.

“There’s a lot of different kinds of glowing creatures,” Prof Krause says. These include jellyfish, glow-worms, the firefly and free-living ocean organisms.

These glowing creatures have been studied internationally for years. The university’s researchers decided to focus on New Zealand glow-worms.

They discovered that New Zealand glow-worms produce their light by chemicals which are different to those of all other glowing creatures.

In a glowing creature, light is generated when an enzyme, which is always called “luciferase” causes a chemical reaction in which an organic substance, called a “luciferin”, reacts with oxygen and light is produced.

The New Zealand glow-worms’ luciferin is very different from anything found in other glowing organisms.

“This may not have been a huge surprise because much of the Antipodes fauna and flora is unique, given that this region has been separate from other large land masses for such a long time.

The University of Otago’s Biochemistry and Chemistry scientists have been studying glow-worms together for almost a decade. Back in the lab: a University of Otago biochemist, Dr Miriam Sharpe, is part of the team studying New Zealand glow-worms.

Prof Perry says the next step is to synthesise the chemical compound which makes the light – the luciferin – in the laboratory.

The research team hopes to secure the funding needed to begin this synthesis, and to continue its illuminating work.

Long-term, while glow-worms would remain living in their native habitats, their chemistry could be used internationally to combat disease.