A New Zealand organisation which rescues surplus fresh food and distributes it to those in need is reducing waste, working collaboratively and even expanding.

KiwiHarvest has branches in Auckland City, the North Shore and Dunedin. It recently opened in Hawke’s Bay and is planning a branch in Queenstown.

“KiwiHarvest identifies food that is good enough to eat, but not to sell,” Founder and CEO Deborah Manning explains.

We are New Zealand’s perishable food rescuers: collecting good food before it goes to waste and distributing it to those in need, to nourish the wider community.”

Their seven green refrigerated trucks pick up fresh food from more than 250 organisations throughout New Zealand, including growers in the horticultural and farming town of Pukekohe.

Trucks collect food from the two major supermarket chains, as well as from vegetable and fruit growers who have surplus or imperfect produce; and from cafes, caterers and manufacturers who have perhaps mislabelled food or produced a test batch. They distribute this food for free to 215 charities, including food banks, women’s refuges, night shelters, churches and city missions. Deborah says smaller organisations often need this food support most as they work at grass roots level – for example, providing a hot meal each week in their community.

“It’s agencies that are on the front line of hunger…that are providing food support for people in need.”

KiwiHarvest measures its operating costs and the number of meal equivalents it dispenses each month. She says for every dollar spent on operating costs, the equivalent of two meals are delivered.

More than 200 volunteers and 17 full-time and part-time employees collect and distribute the food, including bulk loads. Employees are paid a living wage.

KiwiHarvest, then known as FoodShare, won the Ethics Award and Sustainability Award in the 2016 Westpac Otago Business Awards.

The organisation is a limited liability company with charitable status and has a board of directors, key performance indicators and an emphasis on fiscal prudence.

“We have to be able to show that we are having an impact and there is a return on investment,” Deborah says.

“We do make a profit. The profit isn’t measured in dollars, it’s measured in social outcomes.” 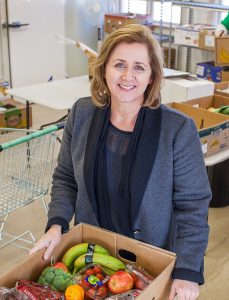 A University of Otago study showed that for every dollar invested in KiwiHarvest, $5.16 worth of benefits is returned to society.

These benefits are for the food donor; the recipient agency because they don’t need to buy food; volunteers; and for those who invest, because their employees like being involved.

Since KiwiHarvest began as FoodShare in Dunedin in 2012, it has saved 1.9 million kilos of food from being wasted and delivered 5.5 million meal equivalents.

Rescuing food reduces carbon emissions because food isn’t going to landfill, where it would produce methane gas or increase toxic leachate. Food production uses energy and water, which isn’t wasted when the food is eaten.

Collaborating with other food rescues is part of KiwiHarvest’s ethos. Deborah says they don’t usually establish a branch where there is an existing food rescue, unless they are working together.

One of the things she enjoys about working in the sustainability sector in Dunedin is that people want to help and strengthen one another.

She started KiwiHarvest (FoodShare) after working as a lawyer for many years and wanting to give back to the community through a social venture run as a business.

The Otago Chamber of Commerce organises the Otago Business Awards, which has recognised KiwiHarvest. Chief Executive Dougal McGowan says the Awards celebrate business in the region.

They enable many businesses to be recognised for their achievements, whether within their sector or for a particular aspect such as sustainability, he says.

The Awards have been held every two years for 20 years now. This year entries closed on August 31 and the Gala Awards Dinner will be on November 30.