When a car driver backed into Neill Glover as he rode his mountain bike, the cyclist instinctively knew the road ahead would be tough and he needed to forgive her.

The woman was reversing out of a car park but didn’t see Neill and hit him, resulting in injuries which still affect him eight years later. The damage to the vehicle showed he may have gone over or under it, but these moments remain blank.

“I know I hit the back of the car but I don’t know what happened to me after that,” he recalls.

“So the bike was mangled and I was lying in the hot tar-seal.”

He’d been on the way to pick up his son, Scotty, from football and wanted to get back on his bike but ambulance staff wouldn’t let him.

As Neill was loaded into the ambulance, he could feel damage inside his body.

“I knew I would need the strength to get myself better, and I knew I had to forgive her,” he says.

The Dunedinite was already aware of the importance of forgiveness from past experience, simply living life and going through the everyday situations many people do. He’d always been able to let things go.

“But that was the major one,” he says.

Neill forgave the driver and told the policeman and ambulance staff that he didn’t want her charged.

He believes that forgiving helped clear the accident from his mind, so he could focus on getting better.

Neill’s son, Thomas (Thos), had leukaemia as a youngster.  Years after Thos’ struggle with the disease, Neill and his wife Helen were driving through the hot, dry Death Valley in California, USA.

“It  was such an inhospitable place and I thought to myself that it was so symbolic of what my son went through. 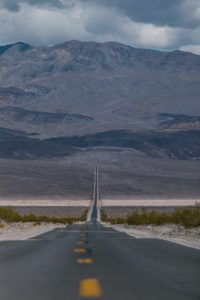 Neill decided to ride through Death Valley on a mountain bike as a fund-raiser and so to build stamina for this, back in New Zealand he cycled about 50 km every weekday and between 100 and 120 km daily at weekends. However, he never got to ride the fund-raiser.

One Saturday afternoon, he cycled from Scotty’s football practice to Tomahawk Beach, where another son, T.J., was surfing and needed a water bottle.

Neill was cutting through the Chisholm Park golf course when the accident occurred. Although Dunedin Hospital treated a nasty leg gash, other serious injuries were undiagnosed for two months.

This was despite Helen telling the doctor something was wrong with her husband’s head because he wasn’t speaking right and his helmet was completely smashed.

Neill’s leg was intensely painful and his physiotherapist recognised something was wrong and referred him to a hospital orthopaedic surgeon, who immediately ordered an MRI.

Two months after the accident, the surgeon diagnosed severe concussion and a broken leg, neither of which had been treated.

The concussion meant he didn’t know his kids and would mix up words, such as thinking ‘wash house’ related to any type of washing.

“There’s lots of the words that are still very jumbled in my brain.”

Everything was fuzzy and black and he was giddy from losing balance. Even now when walking, Neill sometimes needs to grab support.

There were lots of things, I’d stop and have a good talk to myself and say, ‘you can do it’.”

He couldn’t remember the logical steps of using a computer and has had to teach himself to use one again.

Helen assisted with research into aids such as a pine extract that lifted brain fog caused by medication, and essential oils that enabled him to sleep despite severe leg pain. Listening to country music with a calming three-four beat also helped his body rhythm.

For almost two decades, Neill has participated in an informal group, now jokingly named the Grumpy Old Men’s Club. Their weekly lunches have provided vital support, as has his “great” family.

Of 10,000 things he used to do before the head injury, Neill can probably now do 9500 of them, but differently.

His priorities and attitudes have also changed, including that he doesn’t worry about anything.

If it doesn’t get done, it can wait.”

He is a spatial information scientist and formed his company, Land IQ Insights, in 2004. He’s part of Senior Entrepreneurs NZ, which has also offered wonderful support.

This group has a saying that “the currency is a cup of coffee” and Neill reflects that following the crash, he has a high priority on meeting people for a coffee and chat. Neill Glover (right) and son T.J. (second from right) working with a drone and maps for Land IQ Insights, together with Henk Roodt (left) and Colin Aldridge. Photo: supplied

Other positives are that he’s developed an acute intuitiveness and a better sense of smell.

Neill is still recovering and doesn’t think this will ever end. He can’t yet ride a bike without training wheels.

While the Death Valley fund-raiser remains an idea, he says perhaps T.J. will ride and Neill could be his support driver.

“Maybe we can pass the baton.”

About head injury and concussion