Phillipa Hunt is like any other person who flips through magazines reading the articles. What makes her different is that one article she read back in 2013 on the global food waste epidemic ‘floored’ her so much, that she took it upon herself to become part of the solution.

Meet one of the food rescue organisations tackling the issue.

After discovering that a ‘whopping’ one third of the world’s food that is produced for human consumption is wasted, Phillipa was determined to start a local food rescue organisation.

Her aim is to fight for food security in her community, which means that all people, at all times, have access to safe and nutritious food.

She also strives to reduce waste and to help redistribute food from places of abundance to those in need.

It is just criminal that so much food is going to waste when there are so many people in the world who are going hungry,” says Phillipa.

Satisfy Food Rescue was born in March 2014 in Kaiapoi and, is now, seven years on, growing so fast that it collects 12-15 tonnes of food every single month that would otherwise be thrown in the landfill.

There are currently four permanent part time employees, thanks to significant government and local funding grants. As well as 25 regular volunteers who work every weekday organising and sorting food ready to be picked up by one of 27 recipient organisations.

Some of the charities and organisations that use this rescued food, use it for food banks, a soup kitchen that feeds the homeless, community and social housing lunches as well as for breakfast clubs in low decile schools.

Stef Van Meer, Manager of Satisfy Food Rescue, describes the importance of providing fresh produce and meat to vulnerable communities. Satisfy believes that everybody should have access to high quality nutritious food and that there needs to be corporate responsibility to reduce waste.

When asked about the quality of the foods they rescue, Stef lit up and proudly said, “We would never redistribute food that we wouldn’t eat ourselves.” 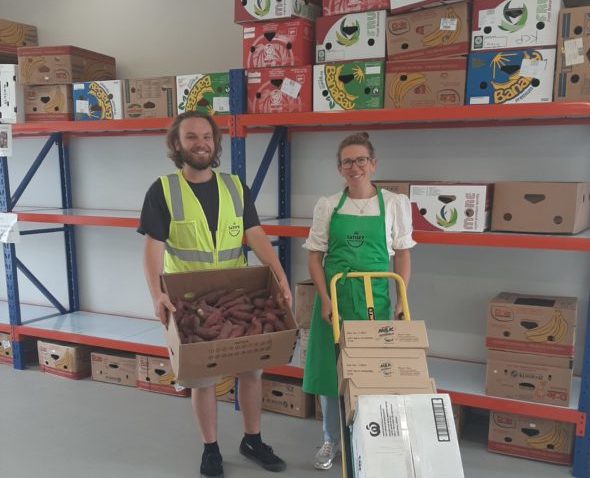 Stef Van Meer and Cameron Crawley working in the warehouse

“Although we never take anything past its use-by-date, there needs to be more education around the best-before date marketing,” says Stef.  “It’s such a throwaway society that children are not being taught what our nanas all knew.”

Any rescued food that is later not deemed of a high enough quality is then passed on to a local pig farmer. “All areas of waste are thought about,” says Stef.

The scale of the operation has increased so much that they have recently moved into larger premises and are now collecting from six supermarkets, from Mandeville to Amberley.

When you consider the fact that Satisfy is just one of at least 19 food rescue organisations around New Zealand, it is quite humbling and inspiring what our nation is achieving both at home and globally.

As well as working as a stand-alone charity, Satisfy Food Rescue has partnered with the Kaiapoi Food Forest, the Community Wellbeing North Canterbury Trust, The Salvation Army, Hope Community Trust, the Oxford Community Trust, Social Services Waimakariri, Waimakariri District Council and Hurunui District Council that make up ‘Food Secure North Canterbury’ who, among other things, concentrate on working towards a sustainable food supply.

The ultimate goal is to work ourselves out of a job. We want to achieve food security for our community.”

Tackling such a major social and global issue can seem like a staggering ordeal. However, when it is broken down, it is possible to see a light at the end of the tunnel.

“So much can start at home,” says Phillipa. “It all begins with honouring food and not taking it for granted.”

She also suggests that we make the most of the food we buy. Meal planning and shopping lists can help reduce waste as well as storing food correctly so it does not spoil before you can use it. Planting a vegetable garden or fruit trees and then sharing the abundance with friends and neighbours is also a great way to contribute.

In a world where we are often overworked and overwhelmed it is reassuring to know that even the smallest of changes, can make a big difference.