George Booth’s dancing may not have kept step with his wife’s, however he is gracing the internet with his Santa Claus dance moves.

The 70-year-old and his daughter, Shirley Șerban, have teamed up to reassure children that while visiting Santa Claus may be different this Covid-19 affected year, that Christmas will remain special.

Shirley has crafted a cheerful music video to help prepare kids that they might not be able to hug Santa or sit on his knee, and encouraging them to care for him.

“We’ll keep you safe, Santa/Because we care,” she sings.

In the video, Santa George jives away in his room at Smith & Caughey’s department store in Auckland, where he works daily for five weeks during the festive season.

When asked about his catchy dance moves, George confesses, “that is a sore point in this family”.

His wife, Carolyn, was a keen ballroom dancer when they met. They would go to the beach and dance together and she would make marks in the sand to teach him where to place his feet. However, dancing remained too difficult for the master mariner.

Several varied takes were filmed for the video, however he was surprised that Shirley “could make something of it”.

A festive season with a difference

George says this festive season will be different for both Santa and youngsters. At Smith & Caughey’s, the red-suited gents need to wear face masks or coverings plus modify their usual charming behaviour.

“No children on laps, no high-fives, nothing like that.”

However, to compensate, Father Christmas is exaggerating his movements and acting larger than life.

The camera which captures special moments with Mr Claus has a wide-angle lens so people can stand to his side, and perspex screens either side of him provide added protection.

“Sometimes children are just so excited that they come running up to Santa.”

George has been doing this seasonal job for nine years in a mall and at work parties and the department store. He says people share secrets with Santa and relate to him in unique ways.

One time a woman confided that it was the first Christmas in 62 years that she’d be without her husband, so Santa George comforted her.

Some families visit for as long as 20 years, as their kids grow up. Pre-teen boys are sometimes reluctant and once a couple practically dragged in an 11 or 12 year-old son. The mum was desperate that this be a memorable occasion.

When George asked the boy what he wanted for Christmas, he desired a white rabbit from Alice’s Adventures in Wonderland. The pair talked and the conversation ended with Santa and the boy reciting a Lewis Carroll poem together.

A photo was snapped of Santa with the lad.

“And we did the dab, and he was so excited that someone understood him.”

The boy’s parents were also grateful.

I would have paid to do that afternoon, rather than being paid,” George concludes.

Shirley’s video combines shots of her dancing Dad with seven cartoons he drew. The songstress has written warm, poignant lyrics to the tune of well-known melodies.

“We’ll keep you safe, Santa/We will not come too near/We won’t sit on your knee this time or whisper in your ear,” goes the chorus. 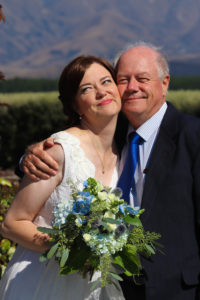 Father and daughter: Shirley Șerban and her Dad, George Booth, almost three years ago, on her wedding day. Photo: supplied

Shirley is also the principal of Lake Brunner School on the West Coast. Around the time she understood from her father that visiting Santa would be a different experience for kids this year, her students began discussing how they were looking forward to Christmas.

She realised they had no concept of “Covid reality” and that if she, as an educator, was aware of how kids were feeling, then parents would be also and might be wondering how to handle this.

“I wanted to make a way for children to understand this in a fun, positive way without being scared or disappointed.”

This year during the Covid-19 crisis, Shirley began creating video parodies for personal relaxation and to lift people’s spirits.

More than 10 million YouTube viewers have watched her Do Re Mi parody and hundreds wrote privately to thank her.