Our interpreter had left and we were outside taking a photo.

I asked how to say ‘thank you’ in Mandarin and once Weidi Xu had used Google to translate my question, she taught me ‘xiè xiè’, which sounds like ‘shea shea’.

The warm-hearted 65-year-old is the president of the Dunedin Senior Chinese Association, which was formed in the mid-2000s and experienced its biggest year yet in 2020.

Association members are enthusiastic about contributing to New Zealand society and showing that they respect other cultures, whether that be Māori, Latin American or another culture.

“We’re no longer living in China, we need to embrace local culture,” Weidi says via an interpreter.

We all come from different cultures and we have to be more tolerant, inclusive and respectful.”

They emphasise understanding and respect and, while the seniors can’t always communicate in words, they like to use body language.

“We can use our music and dance culture to deliver love.”

Rice dumpling cooking demonstrations are another way to communicate.

A hub of activity

During their busy 2020, association members gave 12 traditional Chinese dance and drum performances and celebrated holidays such as the Dragon Boat and Spring Festivals.

They also met twice weekly to practise dancing and martial arts, learn basic English and run activities, including teaching the public how to cook dumplings. 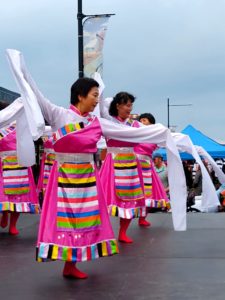 When Kiwis were isolated at home during the Covid-19 national lockdown, the organisation’s two youngest members distributed face masks and bought groceries for their seniors, to help them keep safe.

Members are aged between 65 and 86 and most speak little or no English, often having moved to New Zealand to look after their grandchildren.

Chinese families who have lived in Otago since the 1860s gold rushes usually speak English and live bi-culturally, however those in the association only left China over the past 10 to 30 years.

They came to Dunedin to care for their grandchildren while their children studied at university. After graduation, the children often moved to the North Island to pursue careers.

Some seniors returned to China, where they have many friends and can function fully in their native language and do things they’re used to, such as playing mah-jong.

However, others remained in Dunedin and were in danger of being lonely and isolated. Some are older than 80 and the language barriers mean moving to a retirement home isn’t feasible.

Several senior Asians, mostly from China, formed the association in response to this need.

“That’s the community that formed for communication and to help support each other,” Weidi says.

They chat and share memories – “We try to find a way to gather the people around.”

The original 50 members have dropped to about 30 because people have died or shifted with their children.

Despite this, the organisation remains active. Funding from the Ministry for Ethnic Communities and the Department of Internal Affairs has enabled it to rent a Dunedin Community House meeting room twice a week instead of once.

“It’s more like a family – very warm and a place where we find a sense of belonging.” New Zealand has an ageing population and problems of isolation and loneliness aren’t confined to Chinese residents, Weidi says.

She believes it is important for all seniors’ bodies and spirits that they get out and participate, amid an atmosphere of inclusion and respect.

“With a harmonious and warm community, everyone feels safe.”

Asked what being a Kiwi means to her, Weidi replies that when she first moved to New Zealand more than 10 years ago, she found it difficult to engage because it was her first time outside of China.

After a couple of years, the association’s formation and more understanding of Kiwi society, she began to feel like this country is her home.

“I’m thinking of New Zealand as my home.”

Volunteer South, which supports the association with volunteers