Arriving at new digs with only what you are wearing would be daunting enough for any adult. But it’s often the norm for children taken into foster care.

And that’s where charitable trust, Foster Hope, is able to make a big difference.

Run completely by volunteers across New Zealand, they supply packs of clothing and personal care products to get the child through their first few days in the new home.

Without the packs, the foster parent would often have to take the child shopping for the basics as soon as they arrive.

Louise Allnutt is the founder and CEO of Foster Hope. She is also the Auckland co-ordinator. 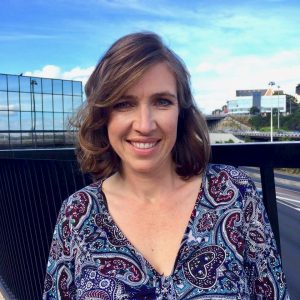 She grew up in South Africa where her mother taught her the importance of helping others.

“When I found out about how some children arrive in foster care with only the clothes on their backs, I joined a friend to make up our first ‘Bears 2 Care’ and then ‘Kits 2 Kids’.

“I love the difference that we’re making to so many vulnerable children. Starting Foster Hope has given me the opportunity to meet and learn from some awe-inspiring volunteers and social workers from all over the country.

You may never know the difference you personally make to a child but I know that we are making ripples with the work we’re doing,” Louise says.

Foster Hope has branches that cover the whole country. The largest geographically is the Wellington branch covering the lower North Island to Napier and New Plymouth.

Wellington volunteer co-ordinator, June Matthews, says her branch has put together about 870 packs this year (up to August).

The packs, worth about $60 each, are supplied to social workers at Oranga Tamariki, organisations that include the Open Home Foundation and Grandparents Raising Grandchildren, plus various homes that provide foster care.

Backpacks are put together for different ages from babies to 17 years and personalised for boys and girls.

June says the packs are given to the child while he or she is being driven to the foster home. Not only is it a distraction but it gives them a sense of ownership and added security.

Children’s packs will include underwear, socks, a knitted beanie, a torch (for helping find the loo in a new house), a facecloth and bath towel (so they don’t feel like a guest), a diary, coloured pencils, a toy, a book, a lunchbox and drink bottle, and personal care products. The standard items in a Foster Hope backpack for a boy

Social workers are also given pyjamas and clothes in varying sizes so they can give each child the correct size.

Most of the items in the packs are bought at good prices or donated. In Wellington a group called Crafty Volunteers knits for the packs.

Foster Hope is a charitable trust and funds its work by grants and donations.

June saw the need for the packs first hand when her sister, Tina, became a foster mum for the first time about three years ago.

The youngster, then 14 months old, came with only what she was wearing – and brought no toys or extra clothes.

It really shocked me how she arrived.”

June says that is quite common as many parents are not co-operative about having their children removed.

She has heard hideous stories, including a whole family sharing one toothbrush and children who have never had the joy of new clothes. Foster Hope leaves tags on bought garments so children know they are receiving new items.

Soon afterwards June saw a sponsored advertisement for Foster Hope on television and got in touch. 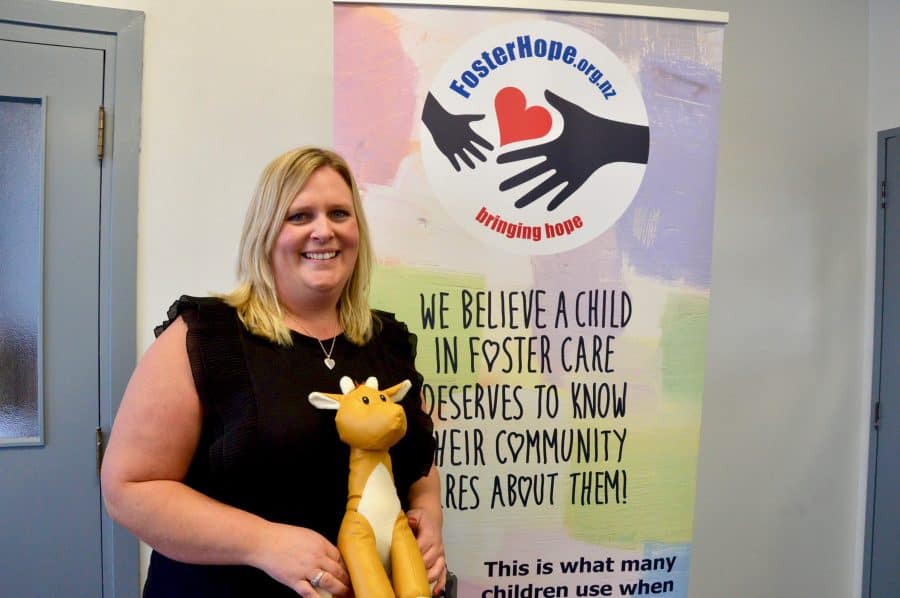 Wellington co-ordinator, June Matthews, with the banner that explains the Foster Hope aims

June says hearing stories about the children has opened her eyes to how making a small difference can produce a huge difference at the end.

She is particularly grateful for the support of her employer, IT company Neos Systems, in Lower Hutt, who allows her to run Foster Hope from their premises.

“I could not have done this without their support.”

June has a core group of about 10 supporters plus a wide network beyond that.

She is also closely supported by her partner, Josh, her two other sisters, Sheree and Lucy, and their parents, Gary and Carol. Carol is the Foster Hope Clothing Angel who sorts and washes donated second hand clothing and some of the toys.

Foster Hope also produces flat packs to help a 17-year-old leaving foster care to go flatting. The packs include linen, a dinner set and a toaster – the sort of things teens would otherwise be given by family to help them set up on their own.

Some children, on learning about Foster Hope’s work, have asked their birthday guests to buy items, such as pyjamas, for the organisation in lieu of presents.

In 2017, Foster Hope Wellington won the Hutt City section of the Wellington Airport Regional Community Awards in the health and wellbeing category. It then won the same category at the Wellington regional level.

How you can help:

Surplus nappies (because a baby has moved onto a larger size) are always welcomed.