The Auckland couple and four other creative Māori and Pacific businesses have been chosen for the inaugural Polynesian Creative Cluster Business Programme.

They will be mentored to break into New Zealand’s fourth and fifth ranked export markets, Japan and South Korea.

The first of its kind, the programme will focus on providing opportunities for diverse New Zealand businesses to build stronger, more sustainable, and authentic relationships with north Asian countries.

They were selected from more than 30 applicants who sought to extend their knowledge of the Japanese and Korean markets.

Over the coming months, the programme will assist Lissy and Rudi to market crochet products that have sculptural elements.

Joy is Lissy’s purpose in life

Lissy’s purpose is joy. Her passion for craft stems from the countless hours she spent with her late father, renowned fashion designer, Colin Cole, in his salon exploring a magical playground of fabric, beads, feathers and trims.

She has been heavily influenced by her father whose generosity of spirit and high creativity have impacted how she sees life, and how she expresses herself through creativity.

Lissy learnt to sew young but about five years ago saw some bright works in crochet which inspired her to learn via YouTube.

Now crochet is her obsession even to the point of covering cars with it. The crochet-covered car boasted a variety of stitches

She mostly uses acrylic yarn and her favourite crochet stitches are double and treble.

My sole purpose is to express God-given joy through creativity.”

Having mourned the death of several people close to her, Lissy has a “real determination and passion to live life true to what I know to be true for me.”

She says there is so much craziness and hate and racism in the world.

“But there is never enough joy and it’s free and inclusive.”

Their statement colour is neon pink

Neon pink is their statement colour and represents “We’re here, Māori and not going anywhere.”

Pink is also a popular colour in Japan and South Korea, two countries Lissy and Rudi have not visited but are quickly learning more about. 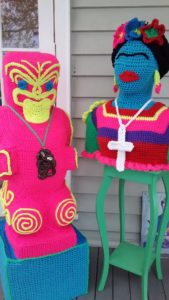 Lissy’s husband, Rudi, who brings an informed knowledge of whakairo and has a background in welding and engineering, collaborates with her on all their installations.

They have recently made two large pou carved in polystyrene and covered in crochet that are intended for Matariki celebrations in Auckland.

The couple have a dream to create a crocheted wharenui measuring six metres by four metres.

“The wharenui will be a visually joyful space for people to immerse themselves in ngā toi Māori, deepening our connections to one another. Crochet as the medium conveys the symbolic connection we have to each other, our tupuna/past, present, and future, ” says Lissy.

The potential would be to tour the wharenui as well as creating a virtual experience so people from around the world can have an experience of a whare.

The inaugural Polynesian Creative Cluster Business Programme is funded by the North Asia Centre for Asia Pacific Excellence (North Asia CAPE) and is hosted by the University of Auckland.

Japan and South Korea are New Zealand’s fourth and fifth ranked export destinations (after China, Australia and the United States) and there is increasing potential for new export opportunities, particularly for Pacific and Māori businesses in New Zealand.

North Asia CAPE’s programme manager, Laura Bunting, says “New Zealand is continually becoming more attractive to the Asia markets because of the Pacific culture here. This makes us unique and separates us from Australia and other countries.”

Partnering with North Asia CAPE to deliver the programme is Oyster Workshop, a collective of Polynesian leaders and entrepreneurs.

Kim Tuaine is one of its directors. She says the New Zealand brand is known for quality throughout North Asia, but exposure to the depth of talent our Maori and Pacific communities have, particularly in creative industries for export, has largely been limited to the branding or marketing vision for Aotearoa.

Bringing diverse cultures back together

“What is appealing to North Asian markets is the uniqueness of our diverse Polynesian cultures and the synergies that exist with many Asian cultures. Polynesian origins lie in Asia (Taiwan) and our languages stem from the Austronesian group of languages and this is almost like a fourth wave that is bringing our diverse cultures back together.”