He’s a bit of an icon around Lower Hutt, loves dancing to Poi E and has been on the job for almost 40 years. Bye bye is one of his favourite words but there is no talk of retirement for this veteran of the hospitality industry.

After all he’s a youngster for folks of his kind.

His name is Pickles and he’s been at Quality Hotel the Angus since the year of its opening in 1984. Now he’s lending his name to a revamp of the hotel’s café and restaurant following a change of ownership.

Staff say the white sulphur-crested cockatoo is definitely part of the team and is much loved by guests, especially children, as long as they treat him kindly.

He’s seen a lot of Lower Hutt folk over the years, from social events and weddings to reunions and regular community group meetings.

Pickles has a special place in hearts of hotel receptionist, Molly, and her family. Her parents had their first date at the Angus and remember visiting Pickles. Molly’s mother had met Pickles years before when her family had stayed at the hotel.

“They find it really funny we’ve got this connection,” Molly says. 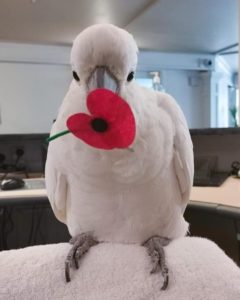 Pickles handed out Anzac poppies left by the RSA for distribution

Most of the time Pickles lives in a walk-in enclosure in the reception area, which also has an outside view.

He has his favourites among the staff and every day they let him out for a bit – perhaps to earn his keep.

“He likes to try out his ability behind the reception counter or visit the adjacent Murphy’s bar where he is always a hit with the customers,” says Hotel General Manager, Anna Ramm.

Anna says Pickles has a cheeky and playful personality and is generally friendly provided his personal space is respected.

He also likes to dance to music. Poi E, the Patea Maori Club’s hit from the 1980s, is a favourite.

“Many guests at the Angus are repeat visitors who often ask about Pickles,” she says.

There are also several service groups that have met regularly at the Angus for years. They all know Pickles.

Groups of local children often come in just to see Pickles and hope he will speak to them.

His vocabulary includes: hello, good morning, goodbye and hello Pickles, and the occasional expletive if he gets upset, especially in the evening.

Anna says the parrot particularly likes to show off to children.

“He’s part of the community.”

Operations manager, O’Neil Pandit, says one of the funniest incidents he’s seen involved a man and a group of women. Pickles said hello to the women but ignored the man. Unimpressed with being ignored, the man started to tease Pickles with a key. Pickles talked to the women but snatched the key from the man. Staff had to open his enclosure to retrieve the key.

In another situation, a hotel guest approached reception to ask for an extra bath towel. Pickles was occupying the counter and decided to try to rip up the towel before pooping on it.

That’s because he’s very protective of anything staff hand over,” O’Neil says.

And if anyone is rude to staff, Pickles starts squawking.

Pickles’ birthday was on 20 October 1983 in Petone.  When the Angus opened in 1984 there were more than 600 entries in a competition to find him a name. The winning suggestion was made by Cathy Laing of Naenae who said at the time she didn’t have a reason for choosing the name Pickles apart from just liking it.

A recent Facebook competition to guess his age (his birthday is written on his enclosure) attracted more than 5800 entries and showed just how well-known he is in the Hutt.

In 2018, the Angus was sold by long-time owner, Peter Norrie. The new owner has begun an extensive refurbishment programme, which will be spread over several years, as the hotel side of the operation must remain open for guests.

Such is the reputation of Pickles that he is taking centre stage in the hotel’s new logo. Pickle’s Perch will be the new name for the daytime café and evening restaurant opening in the conservatory overlooking the corner of Bloomfield Terrace and Waterloo Road.

Anna says Pickles is taking quite a prominent position in the company.

“Why not? Everyone is in love with him.”