I grew up in Invercargill and have not often been to the nearby Catlins. Although I’m now based in Wellington this area has never left my heart.

After many cycle trips around other areas of New Zealand, my wife and I finally decided to explore this rugged and largely unexplored area on our two wheelers.

Little did we realise what an adventure this would be. It would challenge our endurance to the core but would be made up for by the amazing generosity and acts of kindness from locals.

We flew into Dunedin’s Momona airport with our bikes packed in cardboard boxes. Once assembled, we started our Otago/Catlins/Southland 260 km cycle adventure.

During the first few days we enjoyed temperatures in the early 20s and mild winds. However, by the third day the winds had increased in speed.

Early highlights included seeing remnants of the old Henley Co-operative Cheese Factory and the funny sight of a car parked ingeniously in a tree up the side of a hill nearby.  Peaceful Lake Waihola and the grand Garvan Homestead were other highlights. 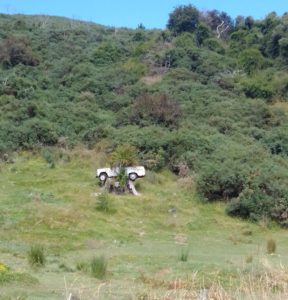 The car in a tree at Henley

We took an unplanned detour to Kaitangata after meeting and having, a deep philosophical chat on the side of the road with an elderly farmer sitting in his tractor. Time seemed to slow down around there.  The detour was well worth the extra kilometres.

From Balclutha we headed to Kaka Point, a get-away spot on the eastern coast, with the bliss of a strong nor-wester behind us.

As we climbed the winding road in the deep valley (walking at times) into a whistling head wind, we reached a plateau of stunning farmland to be met by head winds up to 130 km/h.

Cycling downhill gave us little respite; indeed, it was one of the most challenging parts of the journey.

Since my wife, Christine, was struggling, I decided to cycle ahead to our accommodation not far away.  Our host drove back in his ute to rescue my wife, cycle and full pannier bags.

She had already been offered help minutes earlier by a local passing by in his car.

Our gracious hosts asked if we needed anything, so we asked for some sandwiches.

Our hostess said, “Well, I work in Balclutha at the local Night ‘n Day and I make the sandwiches!”

She also supplied us with some wine. Two relaxing nights in Owaka followed.

At a local beach – Pounawea – we were privileged to see through our travel binoculars sea lions frolicking in the shallow, watery, sandy outcrop.

A day later the wind calmed and the weather cooled. Then, the night before we were due to head south the rain came.

At 7.45 am the next morning as we steeled ourselves for a 31 km ride to Papatowai, clad in rain gear, there was a knock on our motel unit door.  Our host was offering us a ride there, with our bikes and gear.

Wow!  Instead of a cycle endurance test in pouring rain, we took a three-hour scenic drive with stops at the beautiful Purakaunui beach, ferocious waterfalls due to the heavy rain and the picturesque Matai and Horseshoe Falls. Peter and Christine at the Purakaunui waterfalls

The rain continued over the next two days – but we could never have anticipated the impact on us and people we spoke to.  The Mataura River floods had changed plans of tourists and local residents alike.

Papatowai is a tiny village with an iconic old converted bus called the Lost Gypsy Gallery.  Inside, it is fitted with all sorts of gadgetry fun.

Motherboards line the ceiling.  A fun button you push squirts you unexpectedly with water.  A button you press starts an electric train engine in motion on a rail threaded through a bus.  There are many other gadgets you can press and turn.

The next day, after the thrill of the Papatowai gadgetry, we cycled over the Catlins boundary into the Southland District.

Once again, we were met with thoughts of a bygone era and extraordinary hospitality.

At Progress Valley, where we had booked an evening meal at the local Niagara Falls Restaurant, just 4 km away from our accommodation, our host offered us the use of their car to get there.  Again, an amazing offer.

Initially, I said no, as we had decided to cycle.  Then, just 1 km down the road, a cloudburst threatened to drench us, so we returned and took up the offer. Lesson learned!

The next day we headed towards the coast, expecting unsealed roads for part of it so it was a pleasant surprise to reach our destination without experiencing them.

We diverted to Curio Bay to see the petrified forested area and then headed to Slope Point, the southernmost point of the South Island, with its howling winds and spectacular jagged coastline. From Slope Point for the rest of our journey to Woodlands, just outside Invercargill, we had strong westerly head winds again.

The head winds came back with a vengeance, but with assistance from my father, we made it. He picked us and our gear up 18 km east of Invercargill.

On reflection, this journey taught us to not be so independent and ask for help. We witnessed the extraordinary capacity people have to genuinely help people and enjoy doing it.

And, if we did the trip again, we would reverse the journey and enjoy the benefit of the prevailing westerly winds from Invercargill to Curio Bay.