The Cannons Creek Boxing Academy is celebrating the one year anniversary of the girls division and the results are in…girls can punch!

Although their bouts are with punching bags, the girls are hitting with skill and strength according to head girls boxing coach Simone Harris.

Simone says she pushed hard for girls to be included at the gym and now her hard work is paying off.

“I am a very passionate advocate for gender equality”. “I want the girls (from Cannons Creek) to have the same opportunity as the boys” Simone says.

When they first opened only four girls came along to training, but now there are thirty girls enrolled and more on the waiting list.

The success of the academy lies in it’s holistic approach.

Boxing is a physical sport, but the academy trains the girls to be physically, mentally and emotionally strong.

The physical training includes exercises such as rope work, strength and cardio and a favourite: the punching bag. Together the girls learn to trust one another and in doing so form strong relationships and build a team mentality.

As well as the usual benefits of sport, the academy offers another layer.

To prepare and equip the girls for ‘life’, girls participate in the Passport to Success programme.

During the programme they learn eight values, which help build up the girl’s confidence, self-esteem and self-control.

Simone says the academy aims to provide the girls with tools that will stay with them throughout their life.

“If the boxing academy had been available to me when I was young…when “I had struggles and I felt vulnerable…things would have been different”, she says. 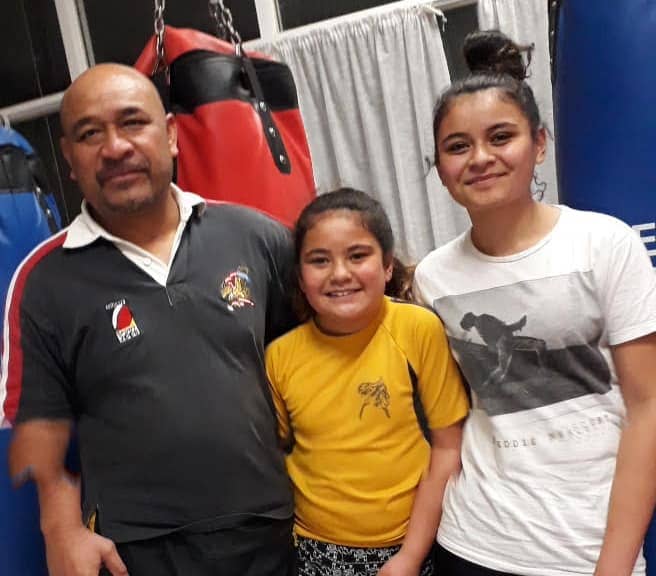 Parent and boxing academy volunteer, Petelo Alosio, says he initially sent his girls to learn boxing for protection and to defend themselves.

“Once I saw the values that were being taught at the Boxing Academy my focus changed” he says.

“The girls learn respect and obedience and it’s a safe space for the girls to express themselves with no judgement. They are encouraged and empowered and it’s safe to do girls stuff”.

Petelo attends most of their training sessions and finds it strengthens his relationship with his girls.

He has also noticed an increase in their confidence and the girls are able to voice their opinions with respect.

Georgia ten years-old says since attending the boxing academy she is more confident with people.

She has grown close to the girls she trains with. She says “Training with the girls has made us a big family. We have gone from strangers to sisters”.

Madeline 13-years says she lacked motivation when she first attended the academy, but now she loves it.

Madeline not only enjoys the physicalness of the boxing, but also the values that are taught there. She says,“It has taught me to do the right thing and I feel heaps more prepared”.

The girls see the coaches like big sisters who encourage them not to be afraid and to be confident in themselves and what they value.