Merge Café on Auckland’s Karangahape Rd is a place of welcome for many, including those without homes. An aim, though, is to support them into living in homes.

Amid artwork and a library of donated books, people can sit at large tables and eat together, no matter whether they are working in the area, living on the margins or struggling with complex needs. Many who are “living rough” like to hang out in the courtyard.

Tradesmen working on K’ Rd construction sites pop in for coffee. One customer visits each day at 11 am for a chat. A marketing executive overcame fear and understood more after collaborating on a project with cafe customers who’d experienced homelessness.

We really encourage people to talk to each other,”

the cafe Business Manager, Julia West, says. Customers and staff often know each other by name.

“It’s a place where people can stay as long as they like.” The main purpose is to provide a welcoming place and affordable meals. Communal and practical support is also offered to assist those who are homeless into more stable homes and work.

Its website says, “With a goal to end homelessness in Auckland, every dollar spent at Merge Café goes towards support for people experiencing homelessness.”

Julia says the cafe offers a $5 subsidised lunch, free meals for those needing them, free internet, telephone charging and library.

A “pay it forward” system enables customers to pay $10 into a fund which subsidises meals for hungry people.

Peer Support runs at the cafe every weekday between 10 am and noon. About six volunteers with  experience of homelessness provide advocacy and support to anyone requiring it. This includes assistance with benefits, emergency or longer-term housing and referrals to tenancy or mental health organisations.

The Lifewise Trust runs Merge and the trust’s Community Development Team works with Peer Support. Two social enterprises have emerged – one based on producing and selling artwork and the other on cleaning houses.

Besides Peer Support, eight volunteers serve in the cafe kitchen and front of house during the week. Two of these volunteers have worked at the cafe for about five years. They were previously homeless.

They’re invaluable, they’re the heart and soul of that place.”

The cafe has four paid employees including Julia.

Some of the about 15-strong Merge community who’ve been homeless and now have homes want to help, so clean bathrooms or wipe down tables.

One of the venue’s roles is to de-stigmatise homelessness. Julia says people usually end up on the streets for reasons beyond their control. Some may have addiction problems, others may have left unsafe households.

At the cafe, sharing conversation over food can increase understanding.

“It really is humanising and helping everyday people who don’t live in that world to understand and to be more accepting of people.”

Merge Café is a social enterprise funded through Methodist Mission Northern and by grants. Since Merge opened in 2010, significant numbers of long-term homeless have been supported into changed lifestyles.

The Lifewise Trust is part of the Auckland-wide Housing First Collective which assists people who’ve been homeless to find housing to suit their specific needs. Over about two years, Housing First has supported 536 households throughout Auckland. 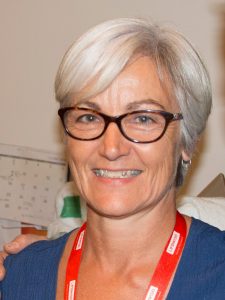 When she used to assess people for this programme, Julia met those who’d lived on the streets for a long time and never been helped or housed. They’d felt unsupported and become marginalised.

Two men in particular expressed cynicism, however joined the programme. Some time later, one arrived at the cafe and wanted to buy her a coffee.

He appeared so different and walked, talked and engaged as an equal because he’d been housed.

A few months later, she met the second man, who was happy and eager to talk.

“He was housed and again, transformed.”

About buying the STREET book Julia’s curated and edited