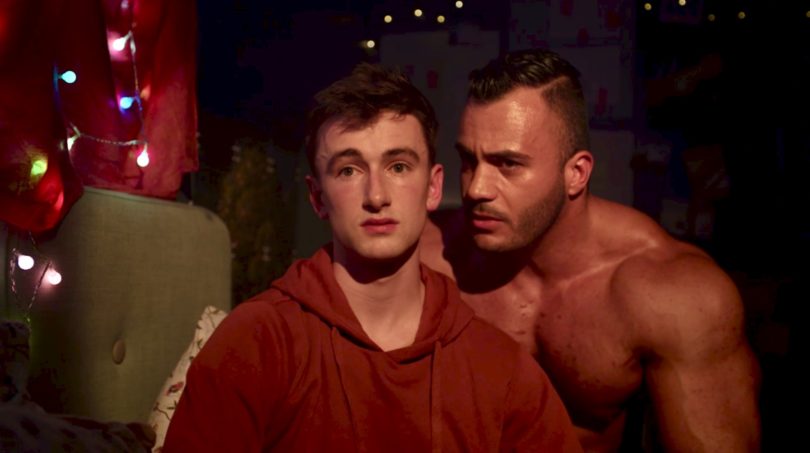 An Upper Hutt student who dropped his medical studies in favour of acting has landed a plum role in a television mini-series designed to help keep young Kiwis safe online.

Ben Porter plays high school student, Logan Murray, in a Department of Internal Affairs-funded a six-part mini-series called The Eggplant, which is screening on TVNZ OnDemand and YouTube.

The story begins with the mysterious discovery of a giant purple papier–mâché eggplant on the No. 1 rugby field at a fictional college called Hilltop High.

Principal Morris, from Hilltop High (played by Karen O’Leary of Wellington Paranormal fame), sets out to find the culprit and uncovers more than she bargained for.

Logan Murray (played by Ben) is an early suspect and has his turn being grilled in the principal’s office ahead of an important rugby fixture against a rival college, whose principal is played by broadcaster John Campbell.

Much of the series was filmed at Manurewa High School.

“The series is essentially made to educate our youth about being safe online, which is a message that is definitely needed today,” says Ben.

“The internet can be very scary and, actually, pretty dangerous, so it is amazing to be able to help kids navigate their way through it.”

Ben has had scary internet experiences too and is pleased he has been able to use them to help others.

“Landing this role was a major stepping stone for me into the industry. I met so many amazing people and got to have some incredible experiences, all while helping people learn to be safe online.

I had a young boy come up to me the other day when I was on a walk and tell me he saw me in The Eggplant and he was beaming.

“Knowing that I’ve made a little difference in his life is such a nice feeling,” says Ben. 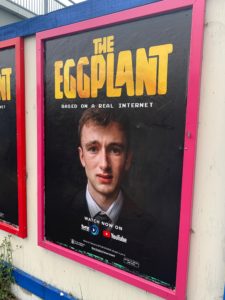 Ben Porter in a promotional billboard on a Christchurch building

The Eggplant was written and produced by Motion Sickness and directed by its creative director and founder, Sam Stuchbury, whom Ben has a lot of praise for.

The purple carpet premiere was held at Events Cinema in Newmarket. Ben took part in a question and answer session at the end.

Ben began university studies in 2020 with medicine in mind, partly inspired by hole-in-the-heart surgery he had several years ago.

As a top dancer, his teachers had also told him he had the talent to pursue a professional career.

In 2020, during his first year studying health sciences at Auckland University he felt there was something missing in his life.

Heart not in health sciences

He loved science and medicine “but my heart was not in it.”

“I wanted to be an actor. I was told by many people when I was younger that it is such an impossible industry to enter, but I was determined.”

He swapped his studies to a Bachelor of Commerce to make it easier to keep his acting career alive.

“I have always loved business.”

He had headshots taken to promote himself and set up a meeting with the Kathryn Rawlings Agency where he was offered their representation on the spot.

“From there, I was invited to join Massive Nui Ensemble (directed by ex-Shortland Street director, Sam Scott), cast in three short films, including Sky Tower and was, most recently, cast as one of the lead characters in The Eggplant.”

Ben enjoys the creative freedom of acting and “being someone you’re not.”

He says every day is one of adventure and opportunity and has several small projects lined up for 2021.

He’s getting used to seeing his face on electronic billboards in New Zealand’s, movie trailers and on social media.