Volunteers, and clever use of technology, are keeping the Auckland Jewish community connected during the Covid-19 lockdown.

Various Jewish organisations in Auckland teamed up to form a group called New Zealand Jewish Community Assistance (NZJCA) to provide volunteer help to members of the Jewish community in the region, including those who might require isolation or quarantine.

A special challenge for the Jewish community was that an important festival on their calendar, Pesach (Passover) fell within the Level 4 lockdown (this year Pesach was in the same week as Easter).

During Pesach several generations of each family gather around one table to share a special meal called the Seder. Its menu tells the story of the deliverance and exodus of the Israelites from slavery in ancient Egypt.

Many of the special foods traditionally eaten on Pesach can be bought from the Kosher delicatessen attached to a synagogue (Jewish place of worship) in Auckland. Online ordering was set up so people around New Zealand could order for the Passover.

Families separated by the lockdown came together using Zoom to read the Exodus story and pray the traditional prayers while eating the meal in their separate homes. Some family members were in retirement villages and others were overseas.

Maxine de Jong is an outreach worker employed by the Senior Outreach Service to service over 65s in the Auckland Jewish community.

She says they had good information about people who belonged to the synagogues and those associated with the wider Jewish community through associated societies. 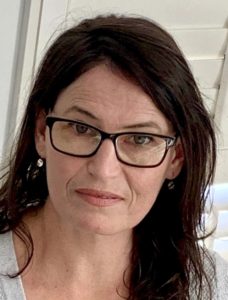 Maxine de Jong is an Outreach Worker to over 65s in the Auckland Jewish community.

“Using this as a basis, we were well-placed to communicate and reach out to as broad a community as possible. When the lockdown was imposed, the connections were already in place, so we were only required to add an extra layer of support.

“Fortunately, our community are largely self-reliant and not used to having to ask for help,” says Maxine.

However, given the unusual circumstances the group reached out, encouraging people of all means to access support within the community should they need it.

“In conversation with the seniors of our community I have found them to have a unique perspective and have an important role in educating younger members of our community,” says Maxine, because they remember rationing, epidemics (such as polio) and closed schools.

They remind us what’s important.”

And they fill their lives with humour, and activities such as art, reading, online word and card games and, most importantly, keeping connected with their families.

Maxine says they have a lot of wisdom to help younger generations develop coping mechanisms.

A group of about 20 volunteers, including young adults, was mobilised to phone the majority of those 70 years and older. This produced a list of practical needs, such as grocery shopping and picking up medications.

The volunteers also bought puzzles, crosswords and activity books for the seniors to enjoy during lockdown. Most of the seniors are involved in outside activities that are curtailed by the lockdown.

The Kosher delicatessen has a supply of frozen Kosher (traditional Jewish dietary standards) meals for those who require them and continues to operate during the lockdown. Many of the special foods traditionally eaten on Pesach can be bought from this Kosher deli attached to a synagogue in Auckland.

The leaders also considered the impact on the under 65s, especially those with small businesses, the effect on their income and of their employees during the lockdown.

And, also, the care of children if their parents became unwell and issues around quarantine. The NZJCA included a phone line to access support for this demographic.

Part of this support was a fund set up to ensure any loss of income would not adversely affect those who needed to cover day-to-day expenses.

This would also ensure transport costs by private providers, (ordinarily done by friends and family) would not deter those needing to get to hospital or medical appointments if the need arose.

Because the community members were unable to attend synagogue the Rabbi reached out to them with online Zoom group prayers and is accessible any time to offer pastoral care.

In another new across-the-ages connection a group of 10 young women preparing for their Batmitzvah (coming of age celebration for girls aged 12) sent gifts celebrating the festival of Purim (the story of Queen Esther saving the Jewish people) and wrote personal letters about themselves to about 30 Jewish men and women aged 90 and older.

The young women were delighted to receive replies from the seniors who told them a little of their journeys in life.

New connections  that may continue into the future, partly thanks to the lockdown, remind us how interpersonal projects within a community may enhance the well-being of us all.