Plastic rubbish is being used as a visual tool in the skilful hands of Otago Peninsula Sculptor Tori Clearwater.

Tori makes art from waste. Her materials include number two plastics such as milk bottles; number five plastics such as ice-cream and margarine containers; and many types of plastic cutlery, soft plastics and beach rubbish.

She uses an oven to melt these plastics so she can sculpt them. Originally her art was figurative, such as birds formed from plastics. Then it became more abstract and minimalist.

One example is a 3 m-tall wall constructed of 810 handmade plastic tiles. These colourful tiles each represent 100,000 tonnes. Together they depict the estimated 8 million tonnes of plastic entering the ocean every year. The wall has been described as like a big stained-glass window and its other side, like a quilt.

The Sculptor sources all her waste products from Dunedin and tries to recycle fully. She gathers rubbish during coastal walks and from her workplace, which doesn’t recycle. Sculptor Tori Clearwater in front of her plastic waste tile wall at the Otago Polytechnic in Dunedin. Photo: Lana Young

People collect their refuse and soft plastics for her and are shocked at the amount, she says.

It’s amazing what people realise when they start to take notice.”

Tori emphasises that she doesn’t think recycling is a solution to environmental problems. Stopping or minimising waste at its source is more effective.

The wake up call

In 2017, Tori (22) began researching plastics and other environmental concerns and started to ‘see’ these impacts in her daily life.

When she visited the Royal Albatross Centre on the peninsula, she discovered a mangled plastic bottle cap in the regurgitation left by a fledgling chick.

“That was my real wake up call,” she says.

I think it’s really sad that birds are making this mistake that ultimately can lead to them killing their young.”

One of Tori’s resulting works is a photo of her holding a clear rubbish bag of plastic collected at a local beach. This bag equates to 15% of her body mass or the amount of plastic found in one 90-day-old seabird chick. 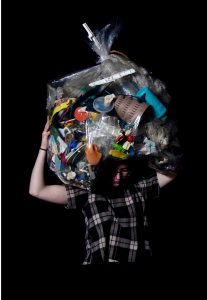 Her collection includes drink bottles and caps, clothes pegs, fish-nets and many other commonly used plastics.

Plastics dumped in landfills or transported by rivers end up in the ocean, where the waves rough action and sunlight cause the plastic to break into many pieces.

They accidentally ingest plastics which are mistaken for food. When the parents regurgitate this to feed their chicks, sharp plastics can fatally puncture digestive tracts. Or cause the adult bird to feel ‘full’ and not forage, because its gut is packed with indigestible material.

Over the past two years, Tori’s art has increasingly focused on human impacts on the environment.

People can become overwhelmed by a mass of statistics or not understand them, she says.

“I’m trying to translate it into a visual language.”

Last year, Tori graduated from the Dunedin School of Art with a Bachelor of Visual Arts with First Class Honours. She has a paid job plus sculpts in a studio on Otago’s spectacular peninsula, where she was brought up.

She says images of pollution’s effects can be gruesome and confrontational, however her art aims to be something else.

What I wanted to do was to make something really beautiful.”

Her work has been exhibited at the Otago Polytechnic and Otago Museum’s H D Skinner Annex. The tile wall can presently be seen at the polytechnic Hub.

This 25-minute film Hooked will have its first public screening at the Regent Theatre in Dunedin on July 27.