Alison who is in her late nineties has faced many battles in her life, including cancer, loss of an eye and husband, brain bleed and two hip operations.

During the seven weeks of lockdown her son kindly cooked her meals and shopped for groceries. On Mother’s Day he cooked her a nice lunch which they washed down with champagne.

She says, “the time went fast and was the same as any day as I live alone. I spent time in the garden, washing, sewing and reading”.

But after seven weeks Alison was ready to step out.

She says, “as soon as Level 2 came along I rushed outside and went shopping for flowers at Farmers and to the supermarket. I loved to browse again as I hadn’t been shopping for weeks. In the afternoon I visited a friend”.

Over the next week she is looking forward to celebrating another birthday as she edges closer to three figures.

Despite her age she retains her stoic can-do attitude and remains full of life.

When she was younger her kids called her ‘Mrs Stirling Moss’ after the famous British racing driver because of the way she zipped around town and backed out her drive (watch the video).

The first time I really got to know her was when I was at the hospital visiting her son. He was recovering from a significant operation to remove some clots from his lung. The day after the operation Alison walked into the room and declared, “You still in bed? It’s about time you got up, isn’t it?”

Her son smiled back and as harsh as those words sounded at the time, it was remarkable how quickly he recovered. Within weeks he was back to his normal self. 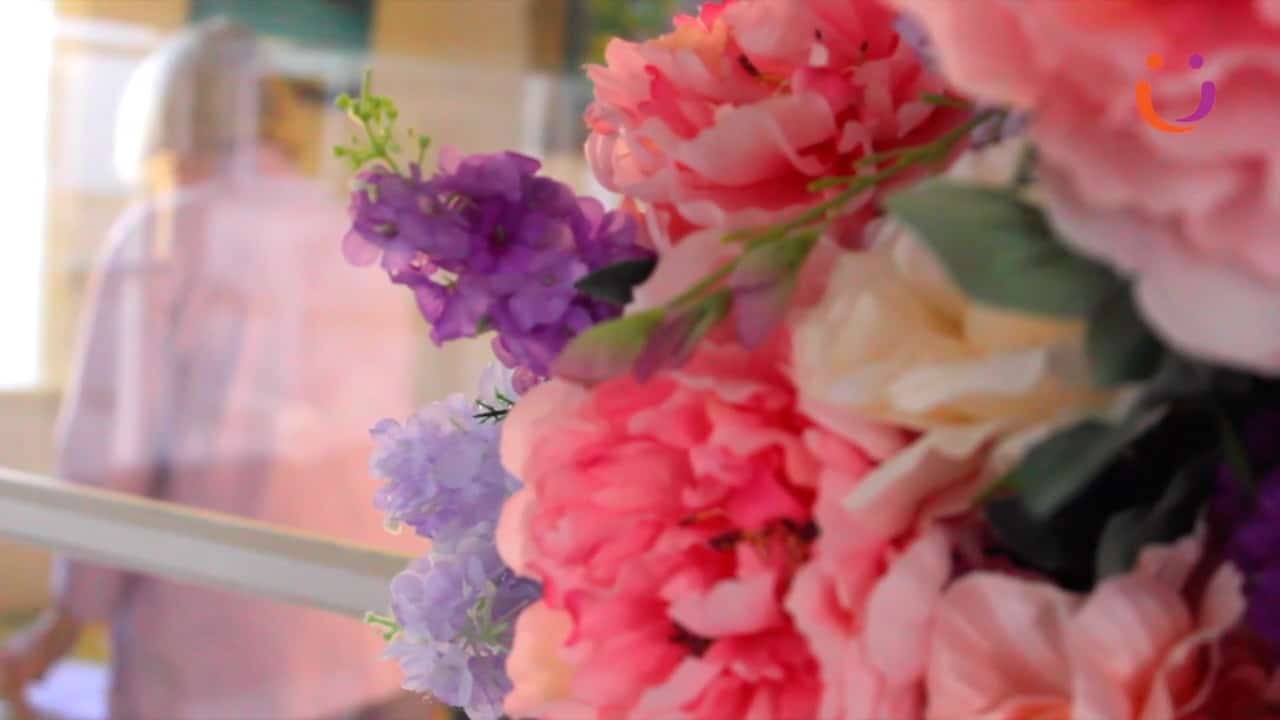 She has faced many battles in her life. In her eighties Alison lost an eye to cancer.  There was no counselling or plastic surgery and eventually they made a prosthetic eye for her attached to her glasses.

In her early nineties her husband died and shortly thereafter she had a fall and hip replacement.

She says  she was lucky to have the op done straight away but was keen to leave the hospital as soon as she could.

She checked herself out four days after the operation and the nurses could not believe it. They said; “Most of the old girls who come in are happy to stay because they have the meals brought to them, cups of tea provided and other people to talk to.”

Back at home the recovery was hard but she had a very good physio who was tough. She decided to give the physio a good go and get on with it …….. and she did!

After many weeks of physiotherapy and winter looming, she had a desire to get away from Wellington and undeterred – booked herself a trip to San Francisco for a holiday alone.

She took up painting in her seventies and one day in her eighties as she was staring at the stark iron fence from her bedroom window decided to turn it into a mural. 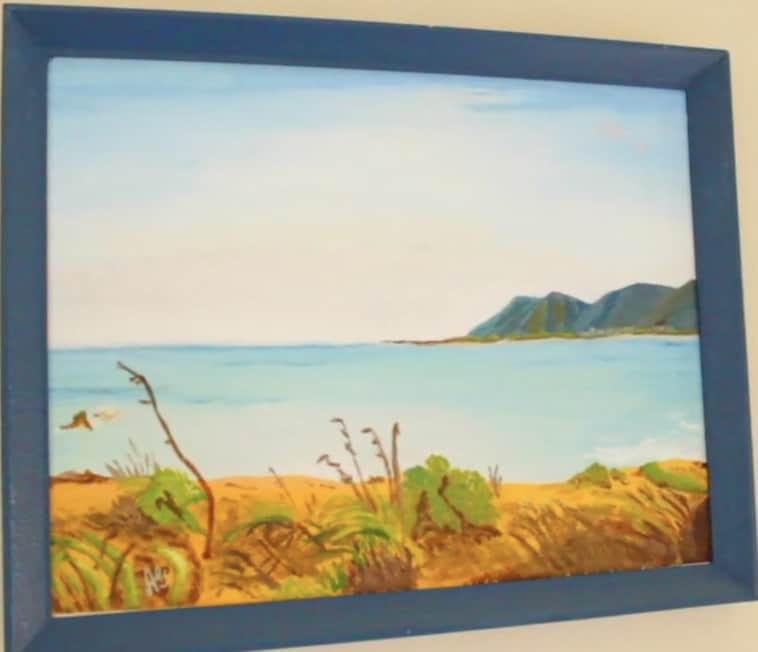 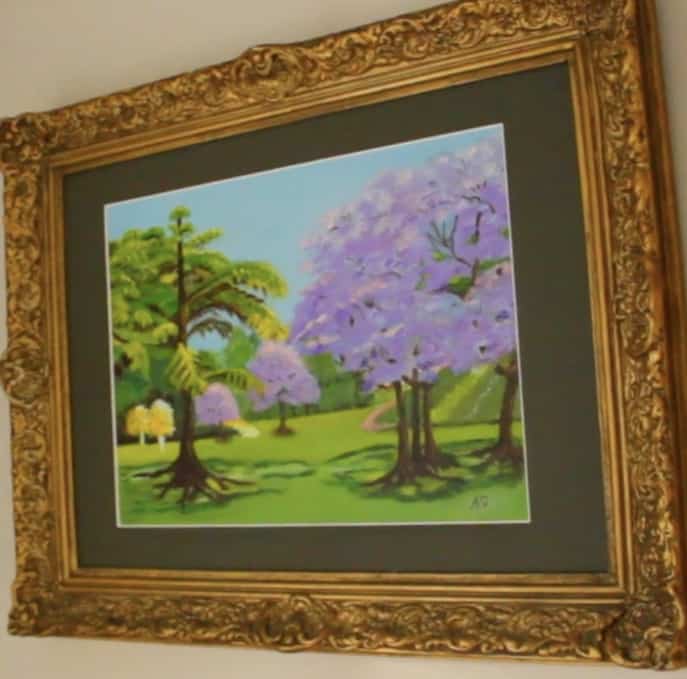 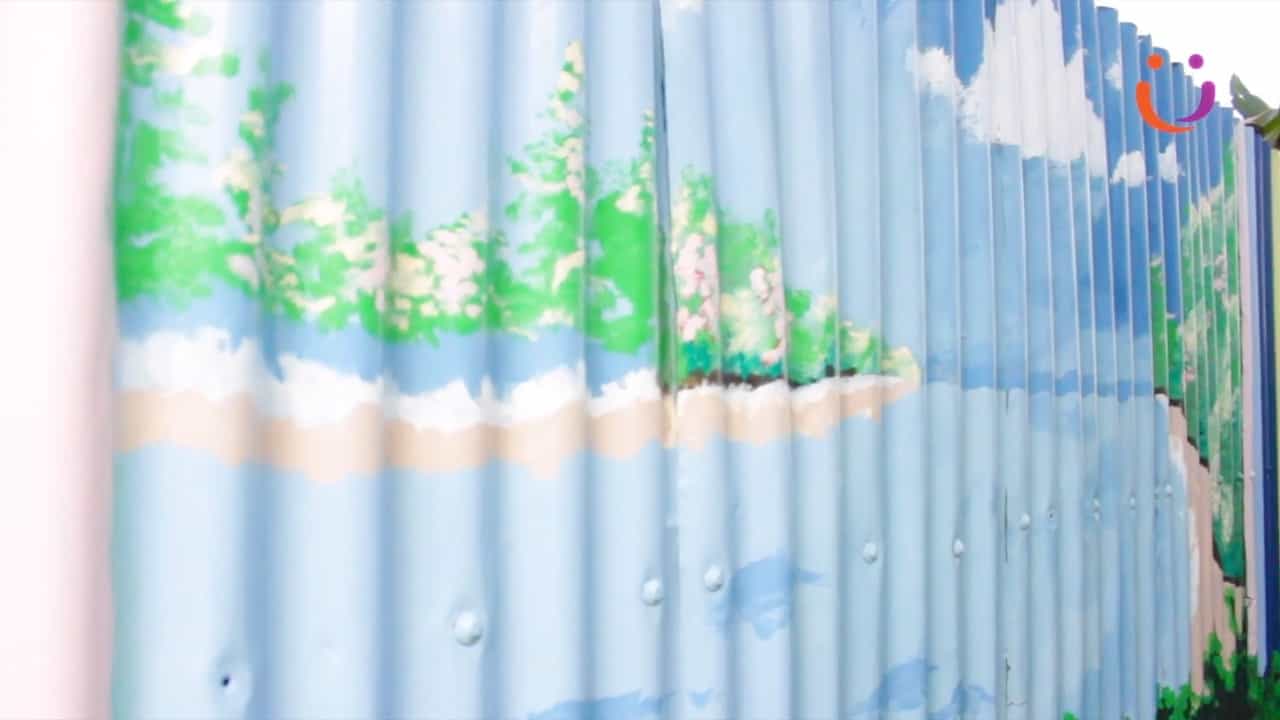 She says: “I paint and enjoy it but I started too late to be very good, but it doesn’t matter, because I enjoy it.”

Other things she enjoys

Helping others – “I love to help people-  you can always find someone much worse off than yourself. Some not quite making the grade and I like to think that when I go to have a cup of tea and a chat that I cheer them up. That is what I try to do.”

Gardening – “I enjoy in the garden and I like making things grow – they don’t always grow for me but I try.”

Her philosophy on life:

Every day is to be enjoyed. I find something to do that at the end of the day I can feel that I have achieved something.

It doesn’t matter if it is only a small thing, you feel much better when you get up and do something!